Three puppies in Glendale, Arizona lost their lives on Wednesday after a deadly swarm of bees attacked the backyard home of Esther Julian. The family dog had recently given birth to six healthy puppies – three puppies died as a result of the bee attacks and a fourth puppy remains missing.

According to the AZFamily, Esther and rescue firemen tried to grab the mother dog, Pixie and her puppies. Ester grabbed her one-year-old daughter and fled to safety indoors. The woman rushed the dogs to their veterinarian where they were given injections, however it was just too late and the pups were stung too many times. 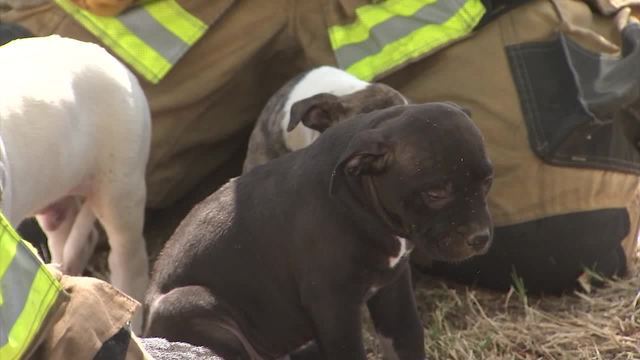 Exterminators were called later in the day and contend the clutter in the yard may have attracted the nearly 30,000 bees to the family’s backyard. There were a lot of soda cans lying in the yard and bees naturally feed off of sugar. The African bees are extremely aggressive and can attack anyone at anytime.

With Africanized honey bees, they swarm relatively fast,” said David Bies with AZ Pollinators. “You look at them or come in contact with their area, most likely they will swarm on you. Bees will go dormant throughout the winter. They will have honey stocked they saved up throughout summer and they won’t come out the minute you go out and rake leaves or do yard work. You’re stirring up bees that have been there for months, and are now pretty aggressive.”

Ester and her daughter were only stung once.

What should you do if your pet is stung by a bee? Experts suggest removing the stinger with either a pair of tweezers or a credit card. If symptoms persist beyond a minor irritation at the spot where the pet was stung or if any swelling occurs, rush your pet to a veterinarian for emergency treatment.

Did you know that if you want to get updates from a Facebook page, you need to do more than “like” it? To get recent postings in your Facebook feed, you must also hover your mouse over the word “following” and then click “see first” from the drop-down menu. You may want to check back with your favorite pages on occasion because Facebook often changes your settings, no longer having your having your favorites among those to “see first.