Children are some of the most innocent people on the planet. They will often do very heartfelt things without any ulterior motive which just makes it all the more charming. And on a farm in Australia, a very sweet video was captured between a little girl and a horse.

On one Saturday morning over the summer, Only In Australia shared the video on Facebook and it was purely heartwarming. In the video, Kellie Thomas shares that her 3-year-old daughter, Myf, likes to sing to the animals.

During the time that the video was taken, Kelli had gone out to feed the cows, and Myf had gone along to join her. While they were out feeding the cows together, she noted that her daughter had been singing the entire time. 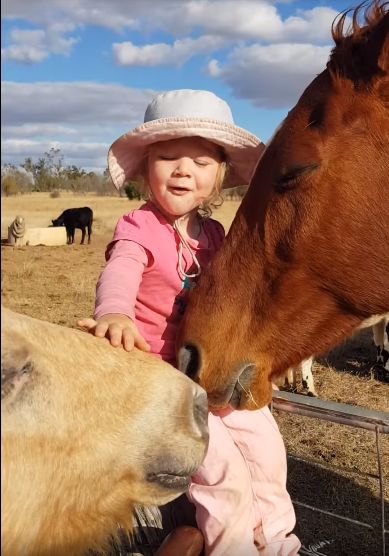 But when they went to the horses’ pen, Kelli noticed that Myf’s singing didn’t cease. Instead, the little girl got up on an old strainer in order to get closer to the horses. And when she did, that is when she began to sing to the horses.

In the video, the sweetest thing happened as soon as Myf began to sing. The horses heard her, and within minutes they were all traveling over to her side of the fence, curious to hear more. 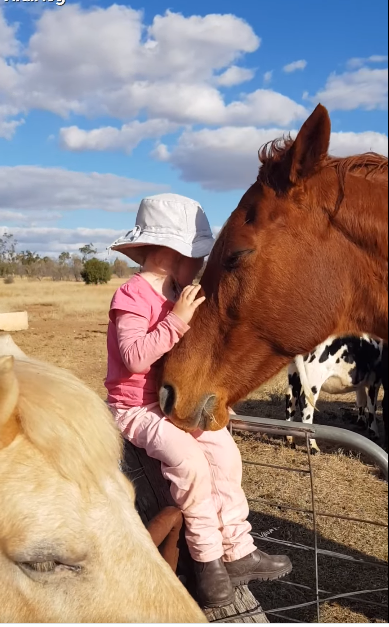 And it didn’t stop there. The young child can be seen stroking one of the horses as she sings to him. It’s impossible not to smile at such a gentle display of care and tenderness.

As Kelli said to Only In Australia, Myf was singing to their horses, Chester and Teddy. It was clear that they were enjoying the song. The two horses were even lulled to sleep by the little girl’s song.

How sweet is that? Check out the incredibly pure video below: