It’s not every day we get the chance to see old friends, which makes the moment so much sweeter.

When this dog finally realizes who he’s sniffing, he really loses it! The poor pooch hasn’t seen his owner for 3 years, but he’ll never forget that scent.

The image of this animal recognizing his long lost friend is enough to brighten any day! 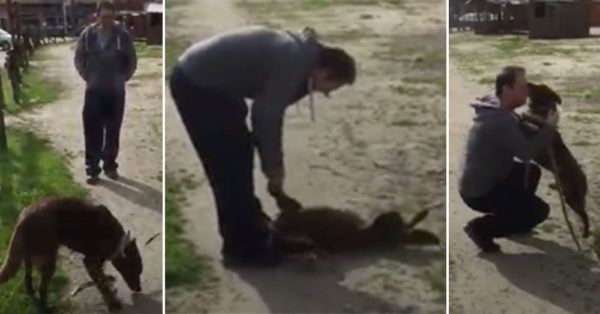 Scent is one of the strongest triggers of memory in many animals, and for dogs especially. Their olfactory systems are an estimated 10,000 times more sensitive than ours, NOVA reports.

“If you make the analogy to vision, what you and I can see at a third of a mile, a dog could see more than 3,000 miles away and still see as well,”says James Walker, former director of the Sensory Research Institute at Florida State University.

While this dog shows some trepidation at first, it doesn’t take long for that furry snout to pick up a familiar scent. A few sniffs later and he knows exactly who’s come to say hello.

Watch the heartwarming reunion in the video below!