Earlier this month, 49 dogs were rescued from a home in San Antonio, Texas – 33 of the dogs have since been put down. According to KENS 5 News, after the dogs were evaluated by Animal Care Services (ACS) it was determined that most were too feral to save.

ACS released a statement about the situation:

“After multiple assessments by the ACS behavioral, veterinary and placement teams, five of the dogs were identified as potential candidates for rehabilitation. This afternoon, ACS partner San Antonio Pets Alive agreed to take responsibility for 11 additional dogs. Due to public and staff safety concerns, the unlikelihood of finding placement for feral animals as well as increasing placement
opportunities for adoptable animals, a total of 33 of the remaining dogs were humanely euthanized today.”

“Animal Care Services works very hard to maintain our 90 percent plus live release rate. In fact, the shelter currently has a 93 percent placement rate and ordering euthanasia is the hardest decision we make. But it is a decision that our shelter staff must make when needed. San Antonio is lucky when it comes to available resources for owners: spay/neuter, vaccinations, even a large number of shelters and rescues that can provide advice and guidance. Unfortunately, too many times tough decisions have to be made because someone else decided not to do right by their dogs.”

On April 6, San Antonio Pets Alive posted photos of the surviving dogs on Facebook and wrote:

Each of the dogs will go to a SAPA! rescue partner who will give them the time they need. Every rescue is prepared to give them time to decompress, time to learn their way in a loving home. They will get warm baths, good food in their tummies and lots of gentle care. 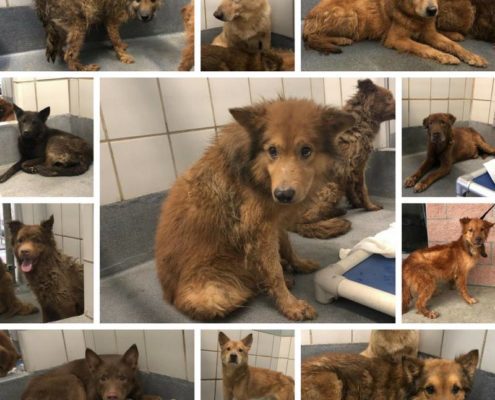