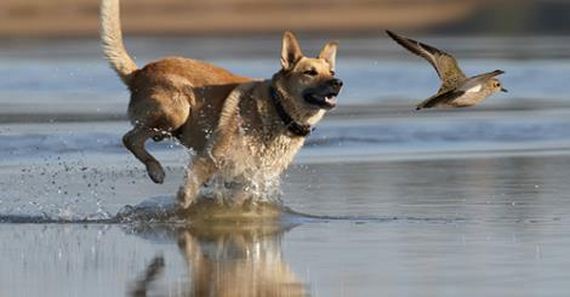 Usually chalked up to a high prey drive, most dogs will chase after something; a tennis ball, a Frisbee, or a stick. What makes a dog think they can catch something bigger, like a motorcycle? Why do some dogs freak out over someone on a skateboard and others don’t? Listed below are five, more or less, common items dogs tend to chase and why.

This can be attributed to a high prey drive. There are many, many breeds that were specifically designed to flush out small animals such as rabbits, gophers, otters, etc. DNA runs deep in these breeds and most of them can’t help but chasing that squirrel, frog, chicken or even the family cat. Sometimes it’s the thrill of the chase, once the dog has captured its prey, they can let it go. More often though, a dog is so in tuned with the hunt that they need to finish what they start, to the very end. 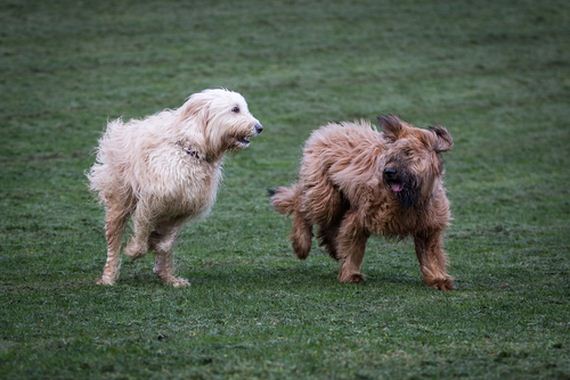 The thrill of the chase and the speed of the prey; two probable reasons some car chasers lie in wait for the roar of an engine. This incredibly dangerous past time has resulted in injuries of both driver and dog. Usually a dog who chases cars will give up the chase as soon as the car stops. In the case of motorcycle or human power-driven transport (bicycle, skateboard, in-line skating etc.) it is more likely the dog will continue the chase with biting and nipping once the vehicle has stopped. This behavior needs to be dealt with as soon as possible before any injury takes place. Contact a professional trainer for advice on how to curb the behavior.

Owners who watch dogs chase their tails, giggle and laugh at the silliness of the act. While the act does seem rather silly, the reason behind it is anything but. Dogs often chase their tails out of boredom or anxiety. In the case of boredom, the incredibly intelligent dog needs constant mental stimulation. Give the dog a job, teach him to fetch the morning paper or herd the cat. Get him involved in competitive sports, something to keep him active and alert. The tail won’t be so appealing if there is something else occupying his thoughts. If it is an anxious dog, talk to the vet about available options to ease the dog’s nerves.

There are several reasons a dog will chase someone. A territorial chase may happen when someone unfamiliar comes to the door, or walks past the dog’s territory. The dog may give chase, nipping at the heels of the intruder. There is also the play chase. Dogs take turns chasing each other in a pack. It is primal good fun. Running after someone and catching them, is self-rewarding. A stranger walking past your house, however, may not find being the target of a running, snarling dog so amusing.

Some dogs could care less about obtaining that little bouncing beam of light. Others become obsessed with it. The laser dot that zips and zooms around the floor and up walls stimulates a dog’s prey drive and they will follow after the elusive orb. There is no fulfillment at the end of the chase, however. Most objects that are chased are eventually caught. Studies have shown that some animals that pursue laser specks may become obsessed, to the point of anxiety.