Retirement is an opportunity to relax and enjoy life. However, a former police dog in China is a little too relaxed during his retirement. A Labrador Retriever named Wang Xiaozhuang, nicknamed “Zhuang Zhuang”, gained a lot of weight since he finished working. Now, all he likes to do is lounge around and eat lots of treats.

For a while, it seemed like the perfect way to spend life, but recently, his unhealthy habits got him into trouble. Poor Zhuang Zhuang got stuck in a park bench. To his embarrassment, the video of it went viral.

How Did He Get Stuck?

The 3-year-old dog was at the park for a photo session. Wang Mingyu, his mom, said that he gained weight quickly in her care, reaching up to 100 pounds at one point. So, he got tired quickly and Ms. Wang let him rest on a nearby bench for a while. However, that clearly didn’t go as planned. Zhuang Zhuang saw two girls sitting on the bench, so he jumped up to join them. When he sat down, his butt slid backwards, and he got wedged in the space between the top and bottom of the bench. The poor pup was too chunky to wriggle his way out. Luckily, many nearby dog lovers were ready to help.

“All the other dog [parents] nearby rushed over to help him. We tried so many ways and finally dragged him out of the bench. It took 10 minutes!” said Ms. Wang.

Thankfully, a group of 6 people were able to pull Zhuang Zhuang free. They had to try pulling him from different angles and positions, until eventually, he was out. He had no injuries, but he seemed ashamed that he had gotten stuck so easily. Little did he know, someone recorded the entire rescue. 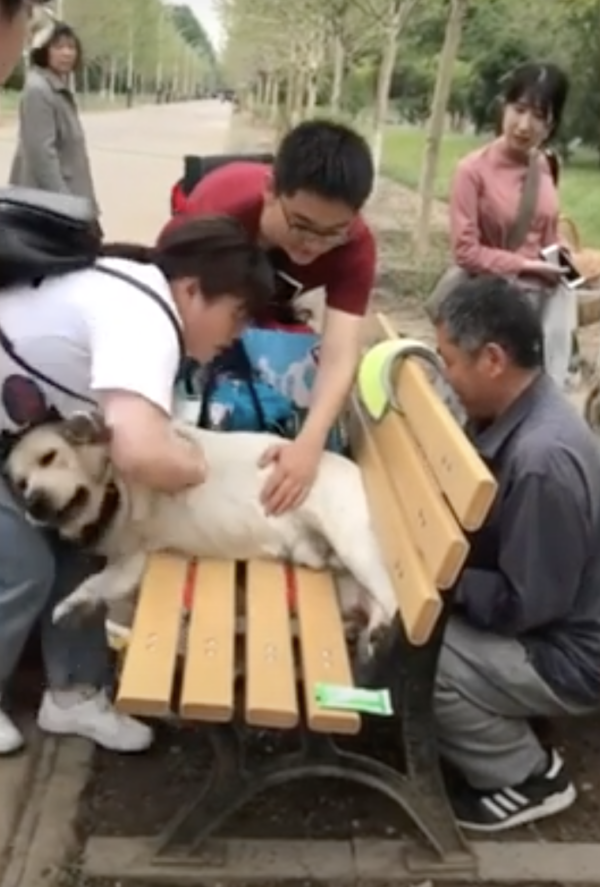 Soon, the video of Zhuang Zhuang’s rescue became famous. Many people were amused by the silly scene, but Ms. Wang and Zhuang Zhuang were both a little embarrassed. Clearly, this was a sign that the pup needed to lose weight fast.

Ms. Wang and her husband are police dog trainers, so they’ve known Zhuang Zhuang since he was only a month old. They said that the reason he gained so much weight is because he has a big appetite, but he has little interest in exercising and training. The pup used to limp, which Ms. Wang worried was the result of arthritis. Later, the vet informed them that Zhuang Zhuang’s joints were strained simply due to his weight.

Zhuang Zhuang’s video has been viewed over 13 million times. Since the incident, Ms. Wang has worked harder on managing her dog’s weight. She said that they’ve started feeding him less, in hopes that he will become healthier. Hopefully, this will be the last time Zhuang Zhuang will ever have to be embarrassed by a viral video again.