Part of what made The Crocodile Hunter so popular—besides the charming passion for wildlife and the charisma of the late Steve Irwin—was the fact that Irwin was always up against some of meanest and most terrifying crocodiles that could rip him to shreds in mere seconds! But they never did because Irwin was a total badass.

Well, turns out, there are more fearless people like Irwin. A man from Florida recently went up against an alligator to save his puppy from certain doom and a wildlife camera recorded the whole deal! 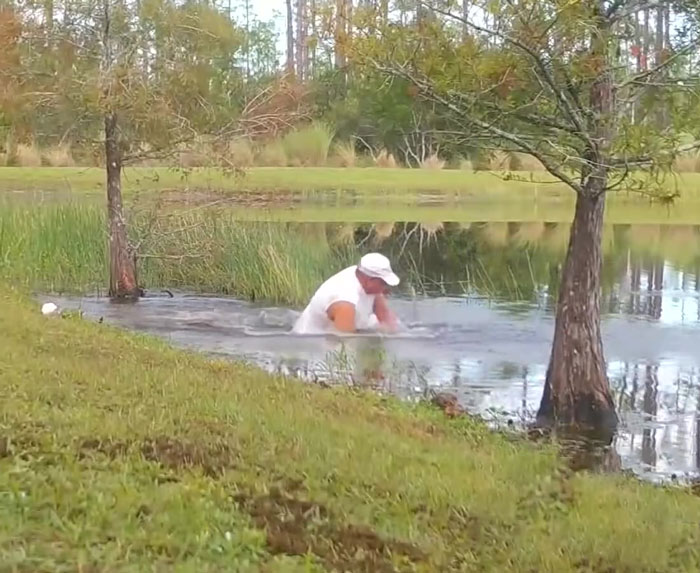 Meet Richard Wilbanks, a 74-year-old senior citizen from Estero, Florida who was walking his dog named Gunner around his backyard pond when a juvenile alligator swooshed right out of the water, snatched the 3-month-old puppy, and started dragging it into the pond.

“We were just out walking by the pond,” Wilbanks said in an interview with CNN, “and it came out of the water like a missile. I never thought an alligator could be that fast. It was so quick.”

He explained that as soon as he saw his pupper being snatched away by the alligator, the adrenaline kicked in and he instinctively jumped into the water to fight off the predator. 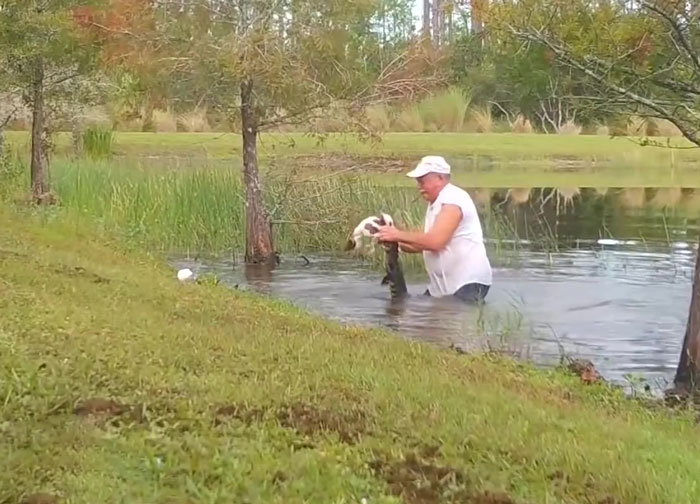 When the alligator snatched the puppy, the adrenaline kicked in and Willbanks quickly came to the rescue 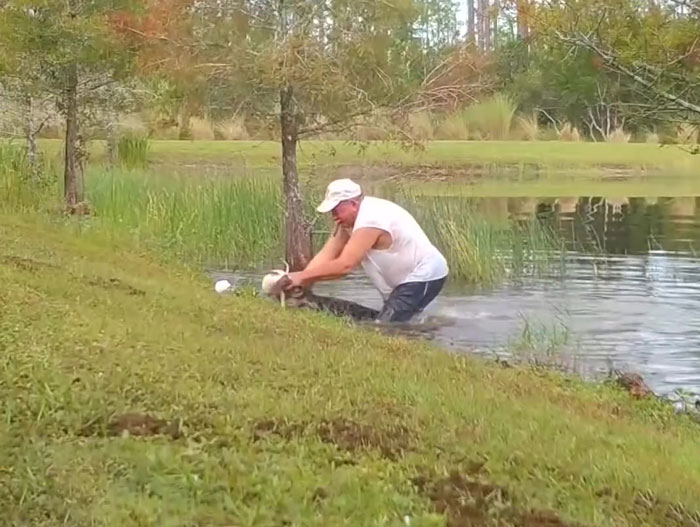 However, what was hard was prying the beast’s jaws open. Wilbanks first grabbed the alligator and took it out to shore. Then he shoved his hands into the mouth and started forcing it open. Soon, the mouth was pried open wide enough for Gunner to be able to escape. The puppy himself had just one puncture wound, but Wilbanks’ hands were all chewed up.

The whole encounter was captured on a wildlife camera that was put there in partnership with the Florida Wildlife Federation and the fSTOP Foundation. The purpose of these videos is to capture videos of wildlife as part of their campaign called Sharing The Landscape. It aims to help people appreciate and understand the wildlife they live near. 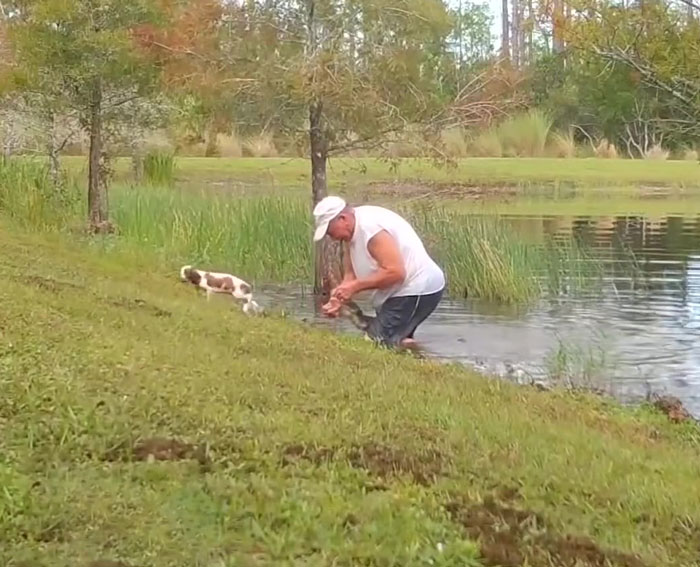 The alligator itself wasn’t difficult to fish out, but forcing its mouth open was the hard part 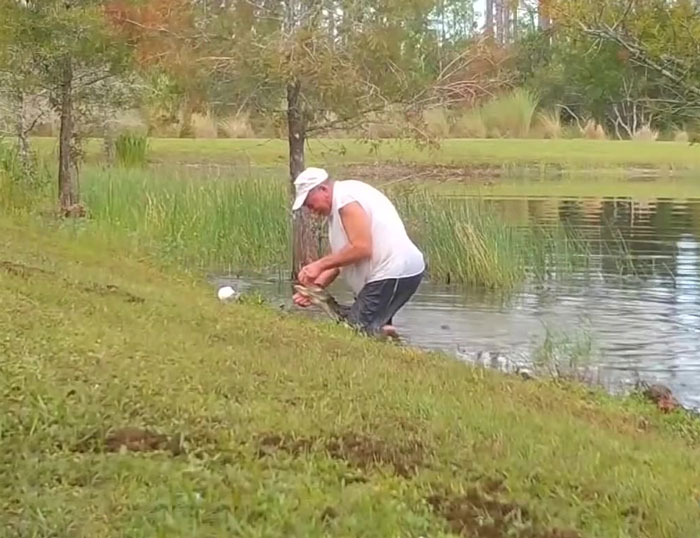 Despite his dog’s near-death encounter with the alligator, Wilbanks supports the initiative and its mission, and he doesn’t want the alligator to be relocated or eradicated because they’re a part of nature and a part of people’s lives.

So now, whenever he takes Gunner out for a walk, he’s always on a leash and at least 10 feet away from the pond’s edge.

The Florida Wildlife Federation and the fSTOP Foundation decided to release the video to the internet where it began going viral. The video started making headlines online with the video gaining over 400,000 views across several locations.

People were praising the Florida man for being a hero and lunging to save his puppy. Some pointed out that he’s the textbook definition of badass, not only because he saved his pupper, but because he also managed to do all of this without dropping his cigar, which is seen in his mouth during the struggle. 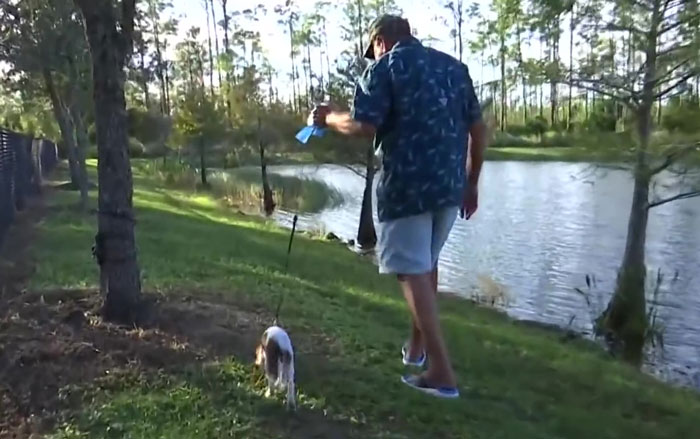 Now, when on walks, Gunner the pupper is always on a leash and at least 10 feet away from the pond’s edge 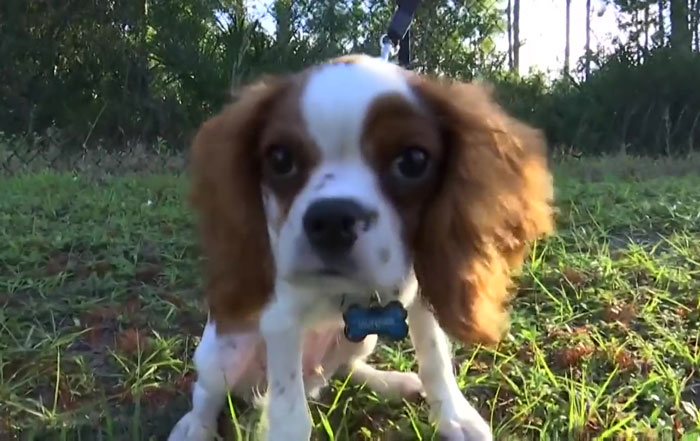