Almost a year ago Jamie White wrote an open letter to the previous owners of her newly adopted 12-year-old dog named Cocoa. After reading that letter, my jaw dropped and my heart sank.

The pain in my chest was not only because Cocoa’s owners had her for all of her life but than decided they could no longer keep her after moving into a new, no pets allowed apartment. It was also because I adopted my own dog from a kill animal shelter and there is not a moment that goes by where I don’t wonder why someone would ever abandon her. No dog deserves to spend their life in cages or sleeping on cold concrete floors.

Now at 14, my dog is full of life, full of love, and just like Cocoa, she is completely spoiled. There are too many animal shelters over pouring with amazing dogs, of all ages, who just want a pack to call their own. I am so thankful that Jamie decided to share her story about the beauty that lies in adopting an older dog.

This is Jamie White’s piece in its entirety:

You don’t know me, and for your sake, you’d best hope and pray that you never have the misfortune to meet me.

Here’s the thing. I’m deciding not to print your name here but you know who you are. I could call you a number of other names, none of which you’d like very much. When I saw Cocoa’s picture on the Animal Control website — when I saw that grey muzzle and read the description stating that her people of 12 years, her family, had surrendered her to the pound — it broke my heart.

I once had a dog that was so ornery she got in trouble for biting a kid on the butt because he’d been tugging her ears. When the city quarantined my dog for 48 hours, I was fully prepared to leave my home, leave school, leave everything in the dead of night, everything except my dog. I was going to Thelma and Louise our asses right out of town. I wasn’t playing. Because that’s how I roll. No dog left behind.

So when I saw that picture of Cocoa, I just couldn’t understand why someone would dump a family member. And my empathy for that dog consumed me, until I made yet another rash decision and I rushed to the pound to adopt her. 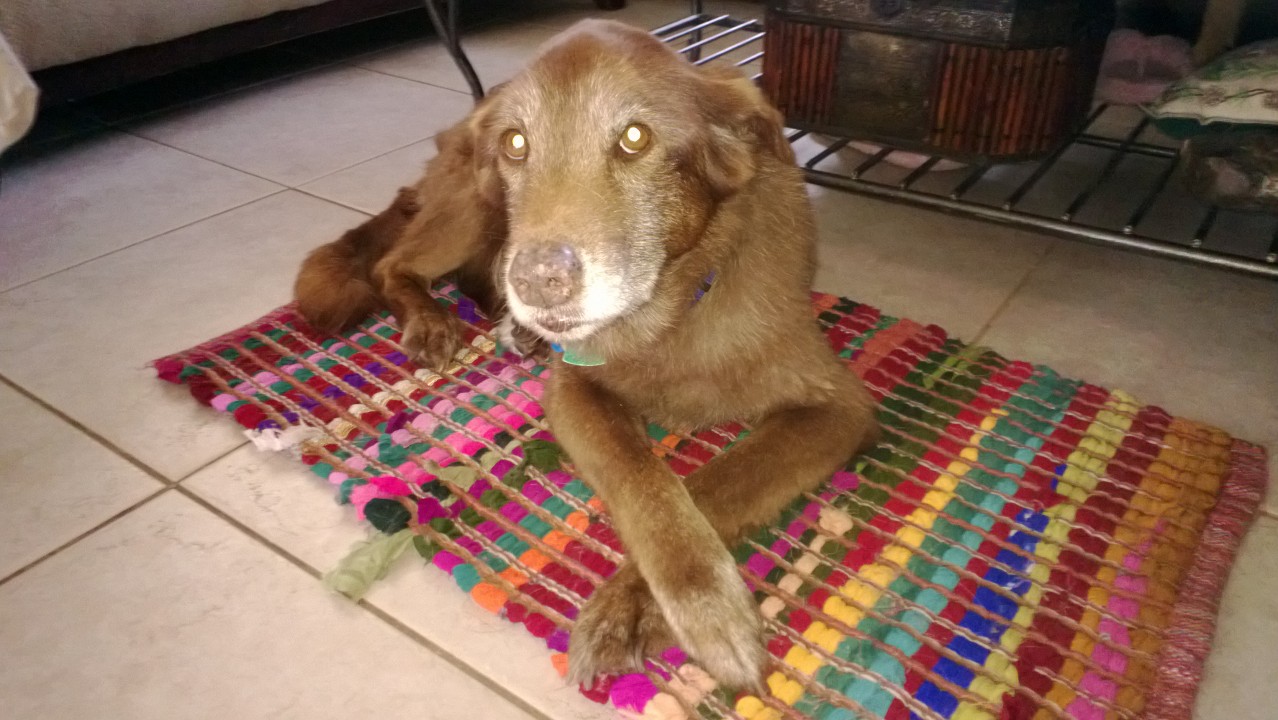 Act in haste, repent in leisure. That’s my motto.

When I got Cocoa, I had pink eye and a sinus infection. I was so sick, but I went and got her anyway, because I was worried that dog was terrified and that she was going to be euthanized. I was worried she was alone and scared, looking everywhere for her family. I couldn’t stand the thought of it — and she wasn’t even my dog.

It took me two days of antibiotics before I finally realized why Cocoa might have been dumped at the pound. Something tells me Cocoa didn’t become highly incontinent over the course of the week between you dumping her at the pound and me bringing her home.

It took us a few weeks, but we finally got the right dosage of meds to keep the incontinence mostly in check. I was happy, Cocoa was happy, and the house was clean again.

But that didn’t last long. Just a few weeks after I got her, she came down with acute pancreatitis. That meant she needed antibiotics and special food, food that cost me $2.25 per can, and she could easily eat two cans in a day. But that wasn’t even the worst part of that office visit. You probably know what I’m going to say next, right? About the tumors?

They couldn’t be sure whether the tumors were causing the pancreatitis, so we decided the “wait and see” plan was the best course of action.

And I became more and more convinced that you had abandoned your family member because you knew she was sick. You knew she had cancer, and you couldn’t afford to treat her or to help her. What upset me so much is that you couldn’t be bothered to drive the extra 20 minutes to take her to the Humane Society, a no-kill shelter. Or to even take her to your own vet and have her humanely euthanized with you there to comfort her.

So every few weeks I had to go buy expensive food for Cocoa, the family member you dumped at the pound. The dog that you abandoned. And every few weeks I would buy her “old lady pee pills.” I found that XL toddler pull-ups worked the best, once I cut a hole in the back for her tail.

In the meantime, Cocoa went to the mountains. She fell over the side of a small mountain, she saw deer. She had so much fun. She would get frisky and try to play with my other dogs right after they ate. It happened every night. She was so cute. My boys loved her and accepted her, like they accept every sad story that comes home with me. They would even let her have the hammock bed every night if she wanted it.

On Sunday mornings I would sometimes let all the dogs come climb into bed with me for a while. Cocoa really liked those mornings. She liked to be included. Sometimes I’d have all three dogs and two cats up there. She loved it.

But all the while, those tumors were still there. And surgery wasn’t an option.

This week Cocoa’s belly started swelling. I kept waiting for it to subside but it didn’t. Yesterday we went in for X-rays and found that the masses were too big, her belly too full of fluid to even see her organs. We could try diuretics to remove the fluid, but that was just a Band-Aid. This wasn’t going away. And I didn’t want Cocoa’s last days to be filled with consternation over having accidents in the house again. You see, that’s the difference between us. I worried about how Cocoa felt. I could look in her eyes and see the stress when she had accidents.

So we didn’t do the meds. I brought her home and figured I’d give her a few last good weeks. I would spoil her and make her feel like the Grand Dame she was.

But it didn’t turn out that way. Turns out today was Cocoa’s last day.

Here’s the thing, though. Instead of dying on a cold floor in a cold building with people who may or may not give a damn how her end happened, she died in my arms. I held your dog’s head in my arms and I whispered in her ear while she slipped away. I told her what a pretty girl she was. I told her how much I loved her as I stroked that spot just above her eye.

I’d like to disabuse you of that notion. I’m writing this letter to let you know just what a piece of shi*t I think you are. If you ever do read this letter, know that I, along with my many animal-loving friends all over this world, think you are the lowest of the low. You don’t take a 12-year-old dog, a “sweet old girl — a wonderful companion,” and dump her at a high-kill shelter. You didn’t even give her a good chance.

She got lucky the day that I saw her picture because let me tell you, my animals want for nothing.

And to all the people reading this who “knew” Cocoa Loco, all of her friends around the world, here’s where the story ends.