For more than a week, Dayton, Ohio, animal rescuers and locals tried to rescue a dog exposed to freezing temperatures after the pet was left in a caged pen outside a vacant home. Because the dog was a licensed pet living in a residential property, animal control had a difficult time removing the pet, but after a week of runarounds and pleads from community members, the dog is now safe. 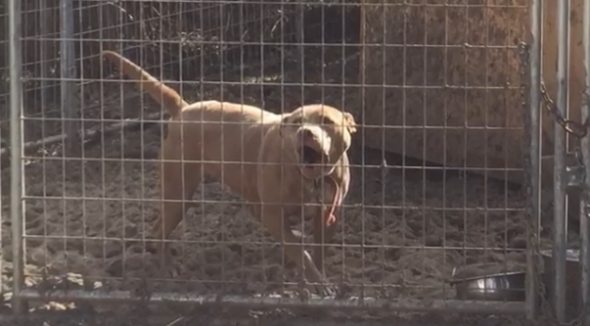 It all started when neighbors of the 732 Huffman Ave. residence reported two dogs abandoned in the home. One was left out in the cold, while another one was inside the empty house. Two neighbors, Lodia Furnas and Jim Chadwell, had been feeding the dog in backyard and throwing blankets to help him survive the extreme cold temperatures, but they knew no one was looking after the pets and both dogs needed to be removed from the property.

According to WHIO News, animal control officers had been visiting the residence multiple times a day to check on the dogs and to leave notices for the pet owner. However, removing the dogs proved difficult because the pets were legally registered and the owner had to be tracked down first, and asked to sign over the pets before they could be removed.

After learning the dogs’ owner had been in jail since December 2015, rescuers took the man to court and legally seized the pets.

The two dogs were safely removed from the property today, around 8:00 p.m. and are currently being cared for by the Montgomery County Animal Resource Center.

Lets hope these two dogs never again go hungry or left out to fend for themselves in freezing temperatures.