We admire kids who are compassionate to animals. Just a few days ago, we featured a little girl who donated her allowance money to help fund bulletproof vests for police dogs. And now we have four young boys who rescued a poor abandoned dog.

7-year-old Andrew Daniels, 11-year-old Kenneth Dancy, 13-year-old Kenny Dancy, and 7-year-old Kevin Dancy teamed up to save the abandoned dog whom they saw tied in a nearby yard. They coaxed the dog with some bologna slices so that she’d know they were trying to help, then wrapped her in a jacket and brought her home 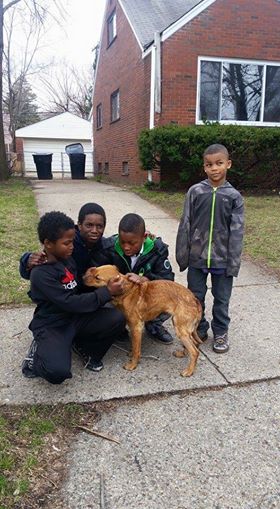 They named the dog Sparkle.

Sparkle was clearly underweight. And she was very happy that the boys brought her some food. You can see just how happy and thankful she is in the photos! 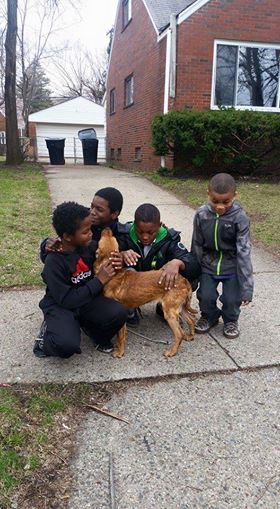 The Detroit Pit Crew Dog Rescue heard about the boys and Sparkle and offered to help. They assured the boys Sparkle would be taken care of by a vet and placed in a loving, forever home. The kids knew that would be best for the sweet pooch, so they agreed. 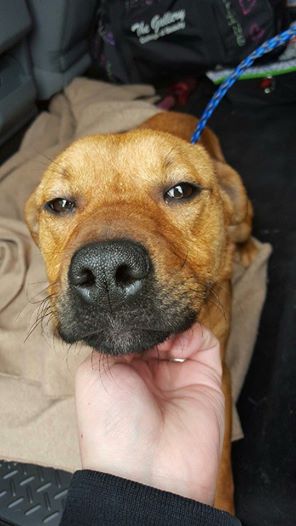 Below is the video of the boys being interviewed by WDIV Click on Detroit.

Thanks to these amazing boys, Sparkle has a chance to live a happy and loved life!

Theresa Sumpter, founder of The Detroit Pit Crew Dog Rescue, told BarkPost that Sparkle will be transferred to Pet Tales Rescue in Grand Rapids, Michigan with the help of Detroit Pit Crew’s Straight Outta Detroit Project. She will then be put up for adoption.

You can read more of this story at BarkPost and at WDIV Click on Detroit.