Meet Mani. According to his family, the eight-year-old dog is loved, however most viewers have accused the owner of animal cruelty.  In a village in southern India, the dairy farmer named Thangavelu attaches a cart to his dog, made with lightweight pipes, and loads the cart with two large milk jugs that he travels around delivering milk to the local villagers twice a day. 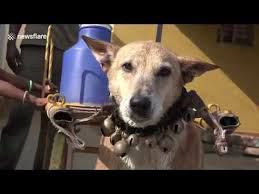 According to the video from Caters/AP News, Mani makes his milk deliveries, much to the delight of the children and adults. The dog also carries groceries for his family. The person filming Thangavelu with his dog, stated Mani even pulled his daughter’s wedding carriage.

Mani was rescued by his family when he was just a few days old and learned the family trade by following his owner on his twice daily route. At the end of the day, Mani receives a bath and is rewarded with biscuits and milk.

Social media comments are nearly all in agreement that  the video shows the dog is being abused. Dogs aren’t made to haul heavy loads. One can only imagine how the dog’s back must hurt. Even his face looks stressed and miserable viewers state. Comments such as the following express the urgency for animal cruelty prevention laws. 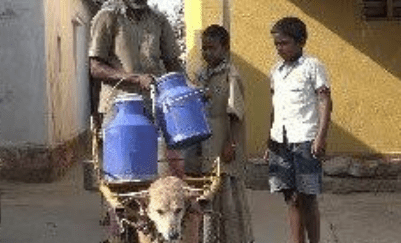 “That dog has about 45 pounds. He is not supposed to carry more than four or five pounds. Those cruel people who claim that they love their dog, should use their brain and think… if that carriage is heavy for them, how on earth could be ok for a 35 pound dog? Shame for those heartless people.  The dog has a very expressive look. This dog hardly can cope with the situation, and look at his ears. Unhappiness and pain… shame!”

(Besides carrying the milk, he also pulls the young child sitting on the cart)

Check out the video. What do you think?