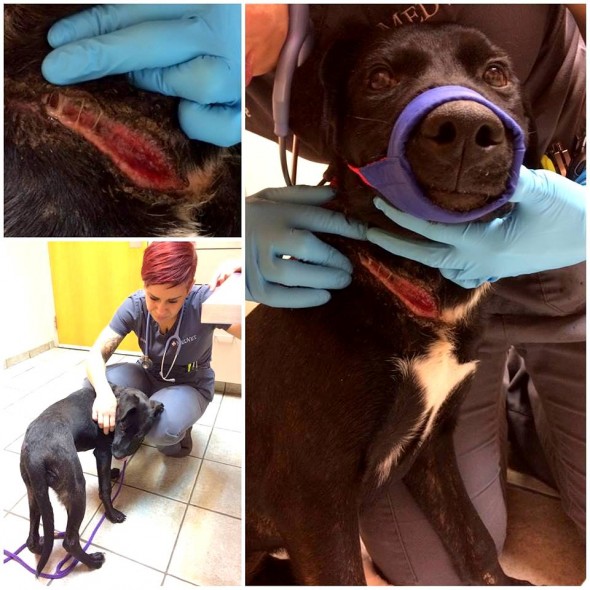 This comes from the devoted staff at Trio Animal Foundation in Chicago:

On October 10th they posted:  ONCE SHE BROKE OUT OF AN EMBEDDED COLLAR/ELECTRICAL CORD, THIS POOR GIRL WAS CHASED DOWN THE STREET WITH A 2X4…

TAF spent last night at the ER vet after being called about a puppy that needed emergency medical attention. Before Ivy was caught, a man was seen running after her with a 2×4. One can only imagine what her life has been like in the short 8 months that she has been alive.

Once at the ER, it was determined that Ivy once had a collar/electrical cord wrapped so tightly around her neck that it actually bore through her skin. This form of torture happened slowly and painfully over an extended period of time. The back of Ivy’s neck is scabbed over but the impression of the collar remains. Ivy’s throat is another story… it bears a large open slit, is swollen and pus drips from it. Infection has already set in and she has a high fever. 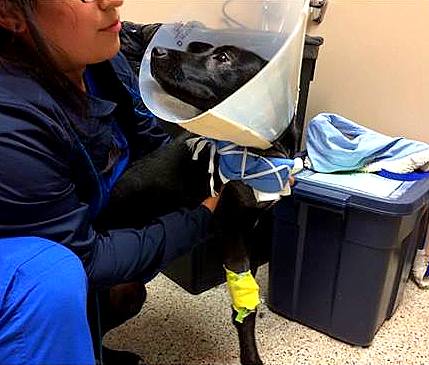 Ivy remains hospitalized at the ER Vet and has undergone sedation to have her neck shaved and the dead/rotting tissue cut away from her infected neck wound. We will know later on today the direction that her medical team choses to go in her recovery. Having a drain placed in her neck is a real possibility if her wound is not properly draining. Our main focus is keeping Ivy’s infection from spreading and the real threat of blood poisoning.

We will be visiting Ivy this afternoon and will keep you updated. Please keep Ivy in your thoughts and prayers.

A big thank you to a concerned citizen, named Jarod, who stopped to catch Ivy and to our friend Katie who played a part in getting her to us. 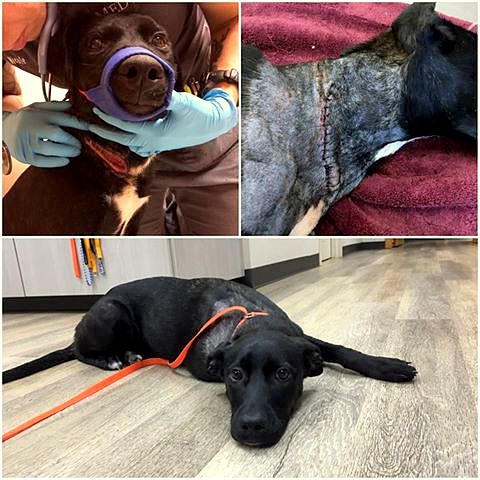 October 12th:   Ivy’s surgery to repair the deep, infected laceration she suffered from an embedded collar/electrical cord went well. The surgeon was able to remove all the necrotic (dead) tissue, flush out all the purulent fluid (blood/pus) and close the wound completely. Having this done will allow a complete recovery in 10-14 days. As you can imagine, after enduring such abuse, 8-month-old Ivy is having some trust issues. Because of this, we are going to work on some emotional rehabilitation so she is not set up for failure.

Please keep Ivy in your thoughts and prayers… she is just a baby and deserves so much more than life has given her. 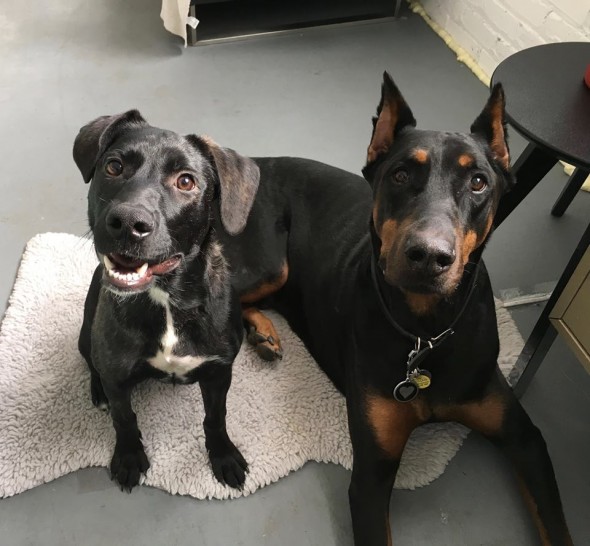 On October 25th came a happy update:  Today, Ivy is doing very well and on her way to recovery. In the 10 days she has been back with TAF she has learned that people are nice, and usually have treats and toys. She has met several dogs, including hunky Miller (one of TAF’s therapy dogs… he is on the right)! Ivy had such a huge crush on him and couldn’t stop gazing at him and licking his muzz. The two of them played all afternoon and then hung out in the office while we worked on paperwork.

Ivy is crate trained and understands the idea that outside is the best place to go potty. She is still very much a young puppy, so she is learning some basic commands and manners.

Ivy will have her sutures removed later this week. We are very optimistic that she will make a full recovery, physically and mentally!