Dogs are the only animals who love to burrow in blankets, and it is believed that they do so to display their heritage of driving small animals away from their homes by burrowing. Pet experts also believe that dogs are denning creatures, and it is instinctive to them to relax or sleep in a small and protected area to feel safe and warm. This can also explain why most dogs prefer their crates when they are left at home alone or to sleep at night. Dogs just need a comfortable, sturdy bed along with a couple of towels, and they can burrow their make-believe tunnel. 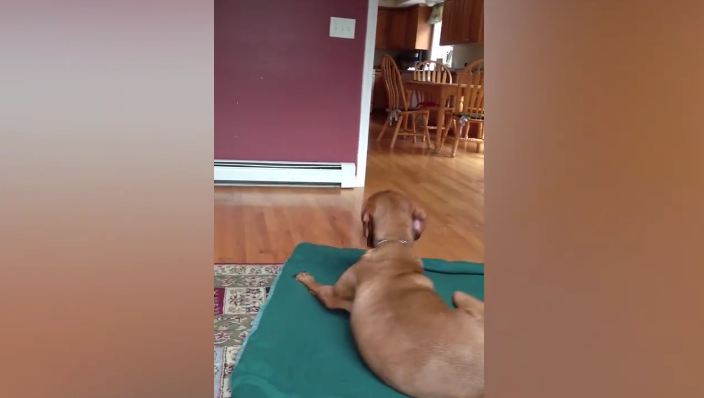 The small dog species who are fond of burrowing are the dachshund and terriers. While the bigger dogs are the Huskies, who survive in extreme temperatures and burrow under the snow to stay warm. This behavior is pertinent to their survival in such cold temperatures. Other dogs love to burrow as well, regardless of their breed.

This behavior is also a sign of hunting instincts in dogs as they like to bury valuables and use them later. It may also be a sign of anxiety, but such behavior is very normal and should not be a cause for alarm.

The dog below wanted to be wrapped in the blanket so he can begin burrowing, but he had no way of telling his owner. The adorable mutt decided to give his owner a sign so she could cover him with the blanket. He got up and began to make a high pitched sound to let his owner know he wanted to be covered up. Immediately the owner of the dog, who was also videoing the pet, got up and went to pick up the blanket. The dog saw her and followed suit, he got up from the floor and allows her to place the blanket on the floor, and he quickly got on the blanket.

He turned around for a couple of times before choosing the best position that suited him on the blanket. He picked the far end since he wanted her to use the other part to cover him up. The dog’s owner covered him up and looked so comfortable with his make-believe den. He thanks his owner by wagging his tail and licking his paws, and she has allowed him to show his instinct.