A lonely dog from Hendersonville, North Carolina, had little chances of being noticed and rescued from the neglectful life he had been subjected to, but this all changed thanks to a group of construction workers who noticed the dog back in September 2015. 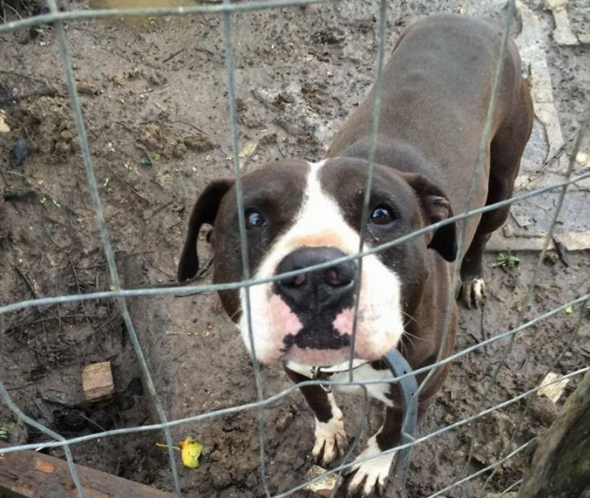 According to The Dodo, Demo the dog lived in a muddy outside pen, on the premises of a house that was semi-vacant. The dog had no real shelter other than a plastic dog house sunk in the mud. The pet owner hardly stopped by to check on the pet, and when he did, all he did to was throw food and water into the muddy pen.

If it wasn’t for the construction workers assigned to work next door to the dog, no one would have ever known Demo existed, nor that he needed love and rescue.

The hard working men fell in love with the dog, showed him affection, shared meals with the pet and improved the dog’s appalling living conditions. They threw cedar shavings to give the pet a dry spot to walk on, and secured a tarp over the chicken wire fenced-in “kennel” Demo lived chained up and trapped in. 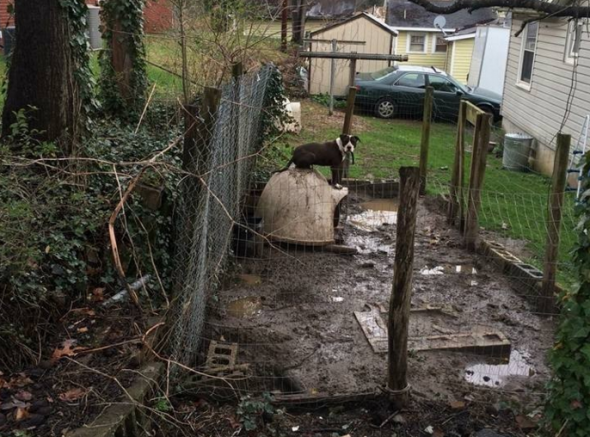 Thanks to these men, Animal Control visited the home and got Demo off his chains, but the dog still needed rescue. Various animal rescue organizations like Nadia’s Haven of Hope Foundation learned about Demo’s plight and started working to get the dog out of that hell, but due to unforeseen circumstances Demo could not be rescued.

The dog’s future did not look promising, but after The Dodo ran their first report on the forgotten dog, Demo’s luck turned and his future looked brighter than ever before. Just days after the report ran, local authorities were flooded with calls and emails from animal lovers across the world asking them to intervene and save the dog.

Hendersonville City Councillor Jeff Miller personally checked on the dog and learned he lived less than a mile away from Demo’s hell. Miller, along Hendersonville’s chief of police, Herbert Blake, and animal welfare activists paid a visit to Demo’s owner on Jan. 15, 2016. The goal, to ask for the dog to be surrendered. Fortunately, the owner was compliant and on that day, Demo left his hell for what now is nothing short of paradise. 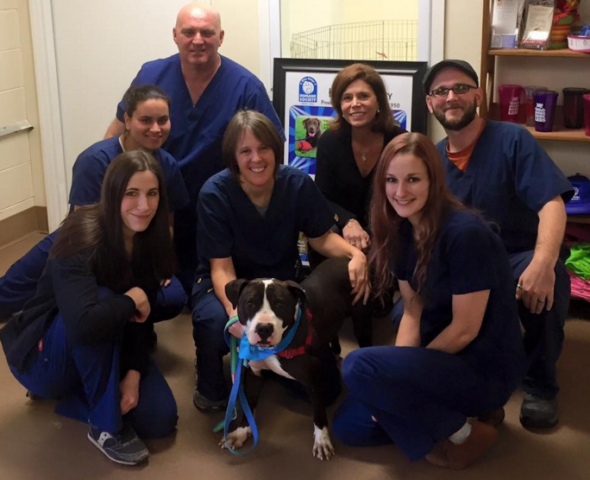 According to a second report Demo’s original owner is in prison and it was the pet owner’s father who was caring for the dog. Authorities spoke with the dog’s caregiver and explained why they were concerned with the substandard care the dog was receiving. It took some convincing, but in the end, the elderly man willingly surrendered the pet.

Demo is now under the care of Blue Ridge Humane Society, a no-kill shelter. There the dog is receiving proper care and tons of love.

The former neglected pet has been given a new name, Noah, and for him the days spent alone, shivering in the mud and with no loving human touch is sight are forever gone.

Demo, a.k.a Noah will soon find a loving home of his own, but we must remember he is not the only animal suffering in silence. There are millions of dogs awaiting rescue. There’re thousands of dogs looking for a forever home. If you see a forgotten or invisible dog, do something, say something. Don’t expect someone else to speak up for a dog. You can be a dog’s saving voice.