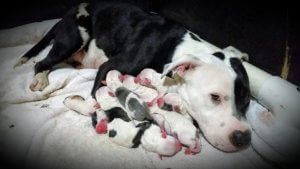 There is an old expression “No good deed goes unpunished.” This seems to be the case for Animal Coalition Unlimited (ACU) when they took in a pregnant, emaciated dog back in November of 2016.  They took this dog in when no other rescue would step up.

The plan, as with most rescue groups, was to care for the mother dog now named PeeDee and find good, responsible adopters for her puppies. Unfortunately, it did not work out that way. There were ten puppies in all. One was adopted by a vet tech at the place where PeeDee was treated. When the remaining nine dogs were in their puppy stage, everyone wanted them. However, as they grew up, they displayed personality traits that needed training and curbing.

The dogs were brought back to ACU one by one. All the dogs have strong personalities and dog aggression based on their mixed breed of Staffordshire Terrier and Dogo Argentina. Some have had bite incidents.

For over three years, Animal Coalition Unlimited has done their best to keep these nine dogs and their mother PeeDee safe and cared for. They have six of the dogs in boarding and four in foster homes. The cost to maintain the dogs’ lifestyle has been exorbitant. Boarding alone is $28 a day, and their food is $800 a month because the dogs all have food allergies and need a special type of food.

ACU was not going to give up on PeeDee and her pups so easily. They tried to make this work by holding on-line fundraisers, raffles, auctions, jewelry sales, paw art sales, but it wasn’t enough. They currently have a $37,000.00 past due vet bill for boarding and vet care.

It was not a problem with the previous management, but the vet’s practice has been bought out by a corporate vet practice, and now a 30-day notice has been issued to pay the bill.  If the bill cannot be paid, the dogs will have no place to go and may have to be euthanized.

For moral obligations, the dogs cannot be released to another rescue organization or a sanctuary because of bite history and traits rendering them unadoptable.

There’s Dudley who just bit his guardian in an attempt to go after another dog. Read Dudley’s story here.

Then there’s Tylee who has been afflicted since birth with what would be considered Autism in dogs. She is very fearful of new people or new experiences.  She would never do well leaving ACU.

Rocket was born the ugly duckling of the litter and waited patiently for someone to fall in love with her. Read Rocket’s story here.

Rounding out the rest of the crew are BamBam, Bullet, Chaplin, Pebbles, Polka, and Sharky. This is ACU’s  last fight to keep these dogs alive, and there is not a lot of time to do it. The deadline to pay the debt is looming closer. They desperately need donors, sponsors, corporate donors. To date they have raised 33% of the goal but still have a long way to go.

Please go to https://givingpledge.square.site/ to make a donation. There are various donation levels and all money will go to save the ten dogs. The short-term goal is to pay the outstanding bill and have the dogs released. The long-term goal is to immediately look for a small piece of property to rent and situate the dogs in a sanctuary setting. This will avoid falling into the same financial trap of boarding fees.

These dogs need a miracle. ACU did not rescue them just to keep them safe for three years then kill them.