Bridget, Gidget and Fidget are three 8-month-old Lab mix puppies who unfortunately fell on the hands of a Kansas City, Kan., abuser. The pets were kept outside, even during the recent winter storms, and they showed signs of chemical burns.

Bridget is the one in worse condition, it seems her abuser force fed her bleach and doused in her in. 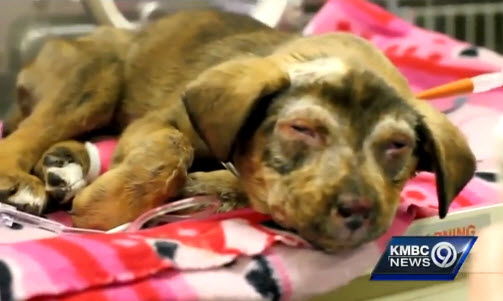 A friend of the animal abuser realized the puppies were being mistreated and decided to do something to help them. The Good Samaritan placed a Craigslist ad saying the puppies were free to a good home because their care-taker was physically abusing them.

Unleashed answered the ad immediately and saved the three young dogs from a horrible death.

Gidget and Fidget appeared to be in better health, they were de-wormed, checked by a veterinarian, and soon will be available for adoption.

Bridget on the other hand suffered chemical burns to her body. Her eyes, back, throat and face sustained the majority of the burns. Emergency surgery was performed on Mon., Feb. 17, 2014, to save her life.

“We were horrified,” said Danielle Reno, president of Unleashed. “We could tell she had some sort of burns on her. Her eyes were matted shut. She has chemical burns that [veterinarians] believe is from bleach that start on her face, on the back of her head, inside of her mouth, go down to her throat and are as far as her throat so far.”

The animal organization will take legal action against the animal abuser and the hope is the pet owner will get charged accordingly to the abuse.

For now the three puppies, especially Bridget, need the community’s help to cover their medical expenses. If you want more information on the abused dogs, and if you would like to donate, please visit Bridget’s donation page.