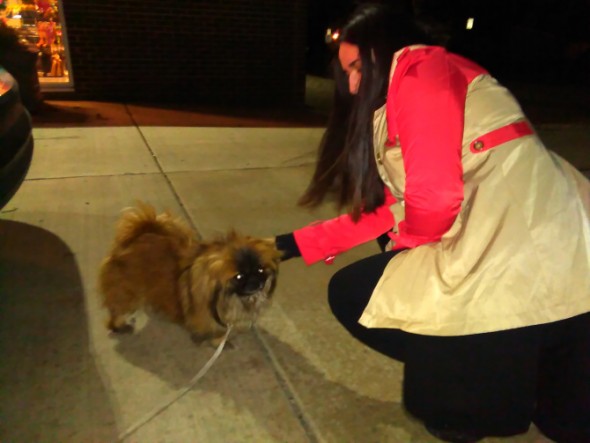 A Chicago animal shelter has reunited the Lyons family with their dog that was stolen from them tree years ago.  The dog, called Honey, was rescued by a good Samaritan, and her family is just beside themselves with happiness to have their dog back.

Honey’s rescuer found her wandering around Midway Airport.  She was brought to Wright-Way Rescue, according to a press release from the Morton Grove animal shelter.  She was scanned by shelter staff for a microchip, and as luck would have it, she did have one.

Now the task of checking to see if the information on it was correct and up to date.  That’s when the Lyons family’s information came up.  They were called by the shelter, and almost didn’t believe it at fist.  They hadn’t thought to ever see Honey again.  They immediately left to go get her and bring her home.

Chris Norris, the shelter’s volunteer program manager, made the call to the Lyons family.

“When I called and told her we had found her dog, she immediately said she was on her way,”

According to the Lyons family, Honey had been stolen from their backyard about three years ago.  They frantically searched for her for a very long time, but she never seemed to turn up.  The Lyons didn’t think that they would see her again, and had to live with not knowing what happened to one of their loved ones.

Honey didn’t even hesitate for one second once she saw her family coming into the shelter.  She ran right to them, and when they went to leave, she couldn’t wait to get into the car and get home.  The Lyons family is now a little bit more complete today, thanks to a kind person caring enough to help out a little dog in need!