Here’s a complete turnaround of events concerning dogs. An event, which happens annually in southwest China by the Miao people of Jiaobang village in the Guizhou province, celebrate Dog Carrying Day. In the century old tradition, a dog is dressed up in human clothes, wears a silver necklace, a hat and is carried in a specially designed chair and worshiped as a god. 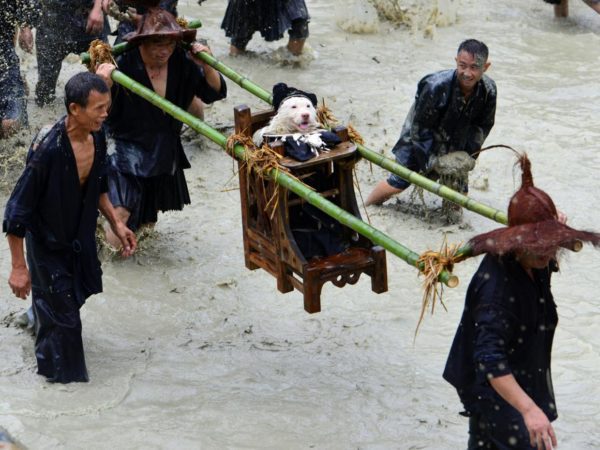 According to the South China Morning Post,  the legend centers around the first settlers in the area who had been dying from thirst when a dog led them to the water supply; thus the beginning of the festival honoring dogs. Villagers believed the dog had been a “heaven sent miracle.” Water shortages are common to the area as porous rocks absorb water. During the parade, a chosen dog is lifted into the wooden chair carried with bamboo poles while a shaman carries a black scepter through the street accompanied by singing and a beating drum.

The celebration has become  known as taigoujie, or the dog-lifting festival. Participants throw mud at each other as a prayer to the god for peace, health and prosperity. There have been some criticisms of the festival with animal lovers, stating the dog is treated cruelly. It is not known how the particular dog is chosen.

In enPeople, after the photos were  released on Aug. 16, the Internet erupted with claims of animal cruelty for mistreating the dog they intended to honor. With a thick chain around the dog’s neck and the dog having been stuck in a small chair, people were very disappointed and quite demonstrative as to their feelings. Still others supported the celebration and even made reference to the Yulin Dog Meat Festival comparing the way dogs are treated so differently.

What do you think?