Army veteran John Russo thought he had seen the last of his American bulldog mix Bones. His ex-girlfriend had taken in the dog when he joined the military four years earlier, and he didn’t think she would want to give her back.

He left the Army earlier this year, and when he got his own place, he started to think about getting another dog. He turned to his local animal shelter, the Flagler Humane Society. On their website, he saw Bones.

“Her face was there,” he said. “It just popped right up.”

His ex had given up the 6-year-old dog in September, signing off that she could no longer be responsible for Bones, Flagler Humane Society executive director Amy Carotenuto said.

“I don’t know why you would give up a dog like Bones,” she said.

Bones became a favorite among the shelter staff, spending time in their administrative area. She was well-trained and quiet inside, and also loved to play Frisbee, Carotenuto said.

“She obviously was well cared for,” she said.

After seeing her on the site, Russo arrived at the shelter thinking that his former pet wouldn’t remember him. In the four years he had been in the military, he had only seen her briefly a couple times while he was on leave. 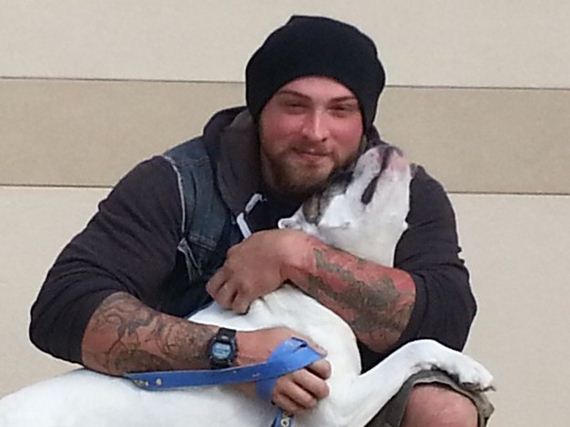 Bones started barking when she saw him, and running around. He dropped to his knees, and she jumped up, putting her paws on his shoulders like a hug, Russo said.

Continue on Next Page