When Army veteran Bob Nowakowski says he “just likes dogs,” it’s a bit of an understatement.

Nowakowski has been delivering treats to the adoptable animals at the Niagara County chapter of the SPCA (Society for the Prevention of Cruelty to Animals) for the better part of 30 years, 7 Eyewitness News WKBW reports. It’s the same shelter where he adopted his late dog Chip in 2004. Chip passed nine years later, and now Nowakowski has the shelter staff put up a sign in Chip’s memory when he stops by.

Nowakowski’s love for the shelter is deeper than mere sentiment. The veteran is a major financial supporter of the Niagra County SPCA. Since 2017, the Nowakowski has donated a total of $150,000 to the organization.

ICYMI: This sweet moment could bring you to tears. Bob Nowakowski donated $50,000 to @NiagaraSPCA. Why? Because he has a special relationship with the shelter. pic.twitter.com/KPQpYd4iy0

“Today we are so grateful to announce that Army veteran Bob Nowakowski presented Niagara SPCA with a check for an additional $50,000 to help fund our new surgical suite!” The shelter wrote in a facebook post. “Bob has donated a total of $100,000 over the course of a few months as part of his pledge to match any funds raised towards the suite and thanks to the support of our amazing community, we hit his goal for us! We can never thank Bob enough for all he’s done and continues to do. In the humble words of Bob, ‘I’m just glad I can help.’ ❤️”

ICYMI: This sweet moment could bring you to tears. Bob Nowakowski donated $50,000 to the Niagara SPCA for the third time. Why? Because he has a special connection to the shelter.Sweet Buffalo Hope Rises

Nowakowski pledged to match whatever amount the society could raise to build their new surgical suite. According to Fox News, he donated $50,000 in 2017 to fund the shelter’s heating and ventilation system. He donated another $50,000 on Veteran’s Day in 2019. He dropped off the third check to fulfill his pledge. 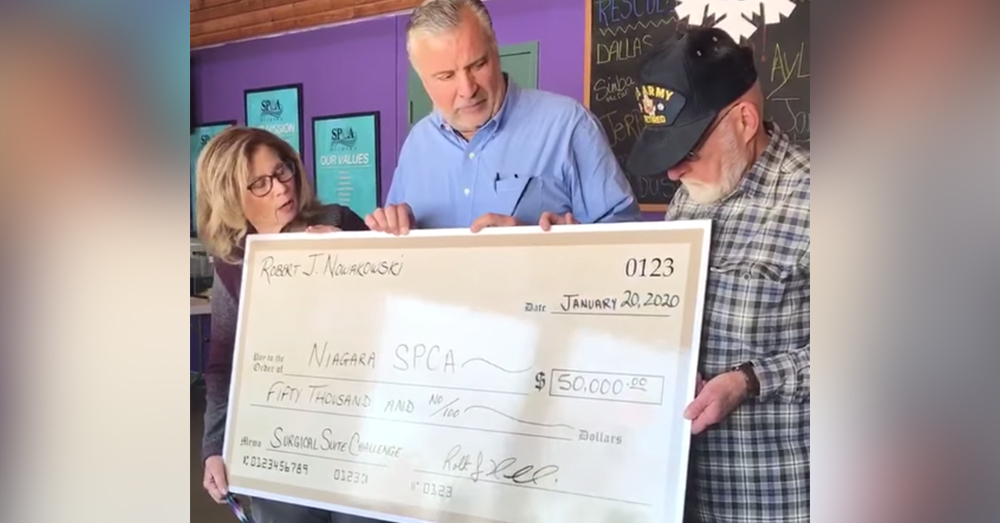 As Nowakowski held up the large check in front of a crowd of shelter supporters, the tail wagging was evident. Even the animals are happy when Bob is around! Of course, the treats help.

KINDNESS: Army Veteran Bob Nowakowski, who "just likes dogs," donates $50,000 to the animal shelter he's visited every week for close to 30 years. He also pledged to match donations up to $100,000 for their new surgical wing. https://cbsn.ws/2r6wpw3

Posted by CBS This Morning on Wednesday, January 22, 2020