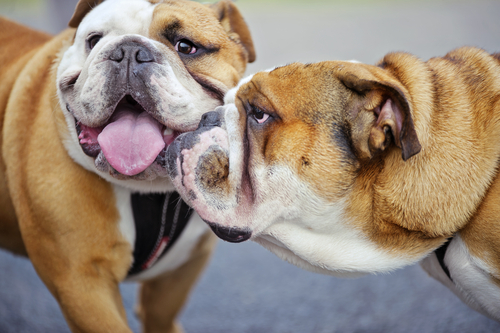 If your household contains more than one dog and there is conflict between them, it makes life a little less peaceful for everyone. We are supposed to be the superior species in the relationship with our dogs, but sometimes it is easy to expect dogs to function like people. Our human tendencies make us want to identify the underdog and lift him up, but is this the way to end the war?

Dogs exist with a definite hierarchy and feel most stable when things are well defined. Humans do not always possess exactly this mentality, but normal dogs almost always do. It is erroneous to apply human values to our dogs.

No one can deny that dogs in their natural state are adapted to live in groups and functional societies require roles that each member must play. In a group situation, if everyone is a leader, the result is conflict. But likewise, if everyone is a blind follower, the group can accomplish nothing and no one’s needs are met.

If we see our homes and the resources provided by them as valuable to our dogs, then we realize that the dogs that reside in it must function as a unit. Each dog must accept his part to play in the home group to create a cohesive environment in which everyone knows his place and has his needs met.

In an environment that has more than one dog (or even more than two), the humans must be the leader, being watchful to discern the instinctive position each dog assumes.

It is easy to identify leader dogs if you are observant. They will be the ones that enter rooms first, receive attention from the other dogs, and are more apt to guard possessions. Follower dogs adopt submissive postures, lick other dogs’ faces, and avoid conflict when the leader dog is first.

Make sure that you allow the leader dog to lead among the household peers. Do not give in to your human tendency to protect the oppressed and enforce fairness. Dogs are happy when they know their role and there is no contention. They care less about equality and fairness than we do and they know instinctively that the survival of the entire group depends upon each dog fulfilling his role in the group.

Behavior problems and safety issues tend to occur when there is instability among the roles. As humans in the home society group, we must sustain whatever order develops among your household dogs to allow them to police themselves to a certain degree. Human involvement can lead to further chaos and escalation of an unsafe situation.