Jake is a very good dog. And he and owner Melani Andrews are lucky to have one another.

Not long ago, Andrews walked into her local shelter. She asked for “the oldest dog you have, the one no one wants to adopt.” 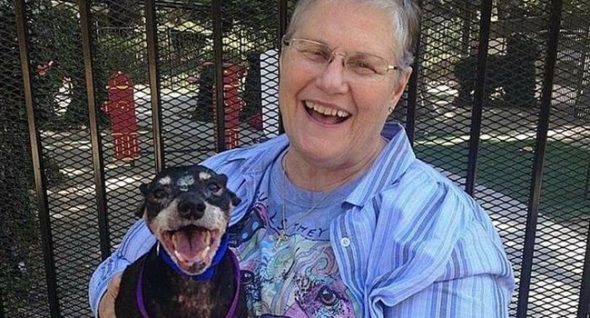 And staffers at the Front Street Animal Shelter in Sacramento, CA, knew just the pooch.

Jake, 12, had come in a couple of months earlier as a stray. He is suffering from bad skin, bad teeth and untreatable, terminal cancer.

Jake’s a “good boy,” said Front Street spokesperson Bobby Mann. But because of his age and health problems, “he was overlooked.”

Andrews, however, thought he was cute right away. They spent some time together at the shelter before she decided Jake would be coming home with her.

This year has been a rough one for Andrews. Her husband passed away in January, her dog a month later. She decided that she wanted to give a shelter dog a second chance.

And also “wanted to share a life with somebody,” she said.

And now, life is sweeter. Jake made himself at home right away. He’s not able to take trips to the coast, but, says Andrews, he enjoys time in the backyard “tormenting the dog next door through a hole in the fence.”

They take short walks, which both enjoy. Afterwards, Jake likes to curl up under a fleece blanket on a chair or on Andrews’ bed. He has, like so many dogs, a routine for lying down, twirling in the blanket into a little dog burrito. Andrews finds it delightful. 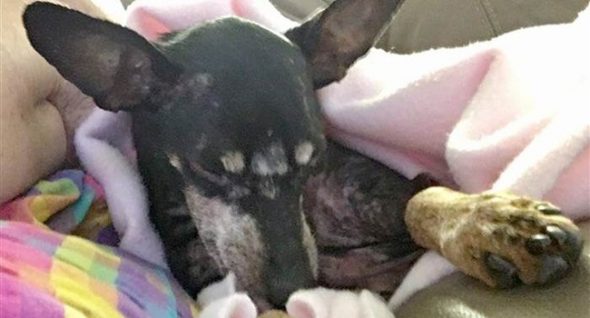 Mann, from Front Street, knows how hard it can be to find a home for a dog like Jake, who is so adorable and good, yet still has so many strikes against him. He hopes that seeing both Jake and Andrews so happy will inspire others to follow suit.

“We always encourage people to adopt senior dogs,” he said.

When Andrews took Jake to her own veterinarian, he asked if she was aware that the dog is dying of cancer. She said yes, she’s aware. Her goal is to make him happy, and comfortable, for as long as she can.

His skin makes him uncomfortable and Andrews gives him coconut baths to help. She gives him warm water to drink because his bad teeth are very sensitive to cold. She softens his kibble with broth to make eating more pleasurable. He wiggles at meal time, she says, and always cleans his plate.

She doesn’t know how much time Jake has left.

“But he’s going to get a good life living here with me,” she said. “I wanted to give a dog who didn’t have a chance, a chance.”