Reid Thompson and his girlfriend were out on a hike with their dog, Finn, in Kenora, Ontario, when they made the dubious decision to let the pup off leash. Instead of heeling, their “bad boy” took off once he caught an interesting scent, Thompson told Fox News.

Ignoring the pleas of his owners, Finn split the scene. A half-hour later, Thompson got the call no “parent” wants to get. It was from the Ontario Provincial Police. Finn, it seemed, had gotten himself into trouble.

“I was informed that Finn had been causing some chaos as he chased a deer along the road, through the hospital grounds and back onto the road. They tangled for a bit, up and over a guard rail and down onto the ice … eventually the deer got away and Finn gave up the chase,” Thompson said.

Police told Thompson Finn had been “detained” and when he showed to collect the dog, they gave him a lecture on leashing your pet. Meanwhile, Thompson’s daughter, Emme, clicked a pic of their pup looking guilty behind bars in the back of the cruiser and tweeted it to the world. 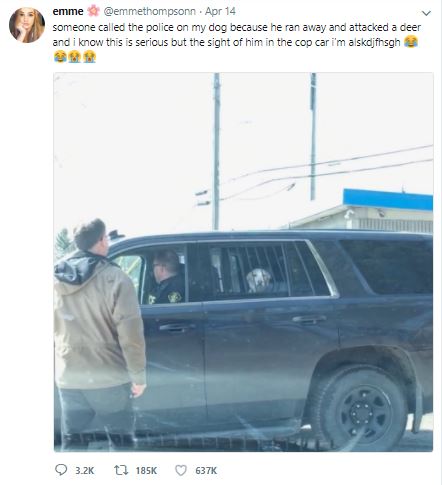 The response threads have been hilarious!

“Not a bark or a ruff. Fifth Amendment all the way and lawyer up,” @GaryBoncella wrote.

“I’m sure you could get a lawyer to handle this pro-bone-o,” said @kimberly_salz.

“After a tip-off from an anonymous collar, they caught the pup-itrator, gave him a pat down, made sure he didn’t flea and sent him to the dog house,” wrote a ridiculously “punny” @JoshuaBowman. 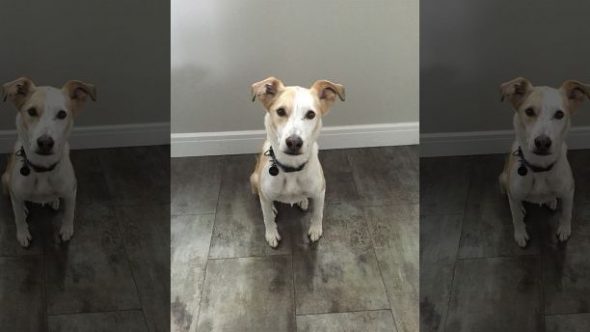 Thompson added that despite the “arrest,” Finn seemed “pretty proud of himself,” but wasn’t thrilled about the post-incident scrub down.

“He didn’t like the bath he got afterwards … the baby powder spritz spray didn’t match his new bad-boy image he is trying to cultivate,” Thompson said.

Watch the latest video at video.foxnews.com