When a four-year-old Shepherd/Husky mix named Mason arrived at the San Antonio Animal Care Services, he was in bad shape medically and on death row.  He had wounds all over his head and on two of his legs. One back leg was possibly fractured. To further add to his misery, he had live maggots in his flesh. The shelter’s first inclination was to amputate his leg. Sadly, Mason has been through the shelter system more than once. There is a record that he was adopted previously from the San Antonio shelter. 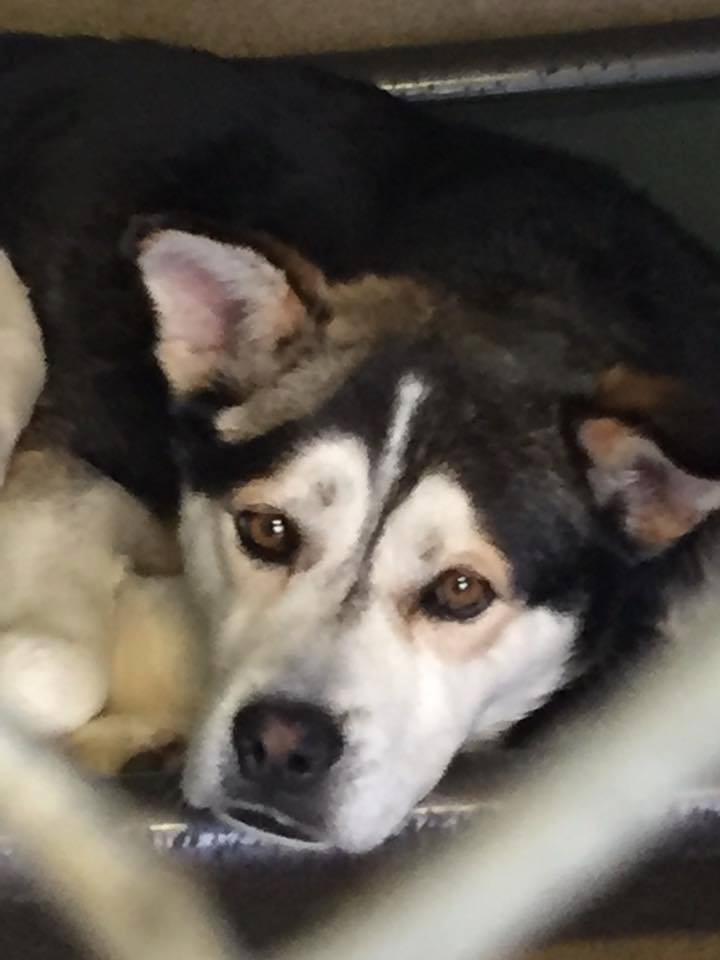 San Antonio resident and animal rescuer, Cheri Kliewer heard of Mason’s plight, so she immediately put out a plea on Facebook for help in saving him.  Cheri has been instrumental in saving many of the death row dogs from the San Antonio shelter. Cheri’s first goal was to prevent Mason’s leg from being amputated if possible. She was given special permission by the shelter to take him to the Callaghan Road Hospital. There Mason was x-rayed, evaluated and cleaned up.  After his appointment, he had to go back to death row.  He was placed on the urgent list which meant he could be killed at any time.   His last available day was 03/10/17.

When Cheri went back to the shelter a few days later, Mason’s leg looked worse – with the bones in his foot showing.  The shelter was adamant about amputating the leg.  The only way Mason and his leg could be saved was for Cheri to pull him immediately, although there was no foster available. But Cheri was not going to give up on Mason. She collected donations so she could pull him and get him into boarding at the Callaghan Hospital where he could receive ongoing care for his leg. The vet determined Mason was going to be fine medically and did not have any broken bones as originally thought.  His leg could be saved by keeping it clean and changing the dressing daily.  It was determined that his injuries were caused by being attacked by a dog or multiple dogs.

Despite all his medical issues, Mason is heartworm negative.  He is also very friendly with other dogs.  Cheri currently has him in boarding at Callaghan Road Hospital, but is desperately seeking a rescue, foster or adopter for him. According to Cheri, Mason has been on his own for a while so he will need plenty of TLC. He is a curious boy who loves giving kisses.

If it wasn’t for a Good Samaritan not giving up on him, Mason would not only have had his leg amputated, but possibly also been euthanized due to his time at the shelter expiring. Cheri Kliewer fought very hard to save Mason’s life and his leg. Now she needs help. Please share Mason for a rescue, foster or adopter.  If you cannot foster or adopt please consider donating to Mason’s medical/boarding fund.

There is an account set up for him at Callaghan Road Hospital under the name Cheri Kliewer. Donations can be called in to 210-647-1101 or via the following direct Paypal link  paypal.me/ckliewer