Two months ago, Bandit was found abandoned in a Minnesota home, living in deplorable conditions. But today, he’s got a new lease on life.

The golden Labrador retriever was rescued from a hot, filthy house back in September, along with 11 other dogs when the barking raised the suspicions of neighbors and the owner hadn’t been seen in days. After watching the home for more than a day with no activity, police went in and saved the lot. 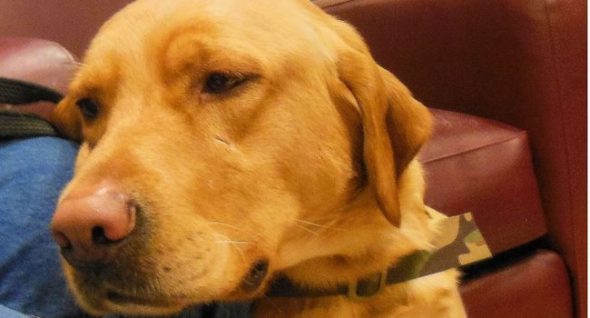 It was more than 95 degrees inside. Dog waste was everywhere. Bandit and the other dogs were locked in kennels. There was no food or water. Eight puppies and four adult dogs were whisked off to a veterinary clinic and treated for malnutrition and dehydration.

The owner has since been charged with misdemeanor animal mistreatment and the dogs, we’re happy to report, have all been adopted into new homes.

Except for Bandit, that is.

At first, it was reported, he exhibited some aggressive tendencies toward other dogs, but the folks at Mending Spirits Animal Rescue thought he deserved a chance at happiness and purpose.

“I was his last hope,” volunteer Kathryn Smith told the Mankato Free Press.

A dog trainer, Smith occasionally fosters some of the rescue’s more challenging dogs.

Bandit, however, hasn’t been a challenge at all.

“I knew from the moment I met him he would be a good service dog,” Smith said.

The 2-year-old pooch, it turned out, was delighted to socialize with Smith’s other dogs and very receptive to training. Smith has trained several dogs for both veterans and children with disabilities. 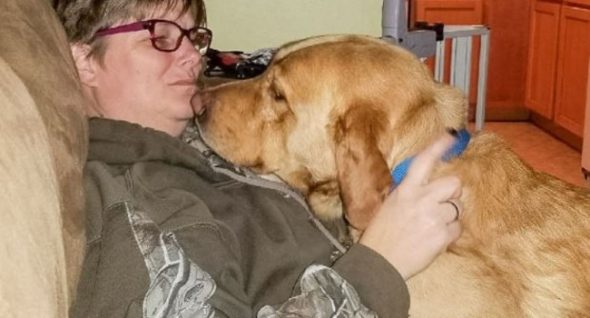 He passed all the service-dog temperament tests with flying colors, remaining calm in stores and restaurants, relaxing at Smith’s feet in busy locations.

Smith partners with a group called Take a Vet Fishing to identify veterans who have post traumatic stress disorder who would benefit from a service dog. They’ll be paying Bandit’s adoption fee — and Smith’s training (which can cost in the thousands) comes gratis as she volunteers her services.

The Wisconsin veteran who Bandit will eventually serve will not pay for the wonderful new companion and helper. In fact, he is the one who gave Bandit his name, and he’s given update on Bandit’s progress as the training proceeds. Smith, who’s been training service dogs — and also puppies who go on to become K9 officers – for a decade, hopes he will be ready for service in early 2018.