Dogs are very protective over their loved ones, but those loved ones are typically just humans and other dogs. However, Molly the Beagle loves a baby possum! Molly recently had a litter of puppies that died at birth, which was heartbreaking for her. While she was looking for her puppies, she came across a baby possum that had been abandoned by her own mother. Without hesitation, Molly took her in.

Molly lives on a farm in Australia, so she’s used to hanging around all kinds of different animals. However, Elle and Sara Moyle, Molly’s human family members, were shocked when Molly came home with a new friend. 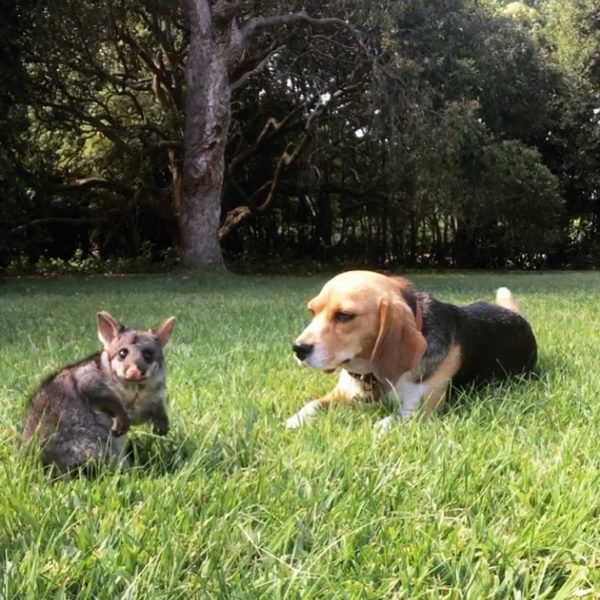 After the heartbreaking loss of her puppies, Molly had run outside to see if she could find them. But what she found instead changed her life. She returned to Elle and Sara with a baby possum clinging to her back. It was love at first sight.

Elle and Sara nicknamed the little possum ‘Poss’, and she soon became a part of the family. Poss and Molly were inseparable from that moment on.

“They’re an unlikely pair,” Elle said. “I think that possum thought that Molly was her mother and vice versa.” 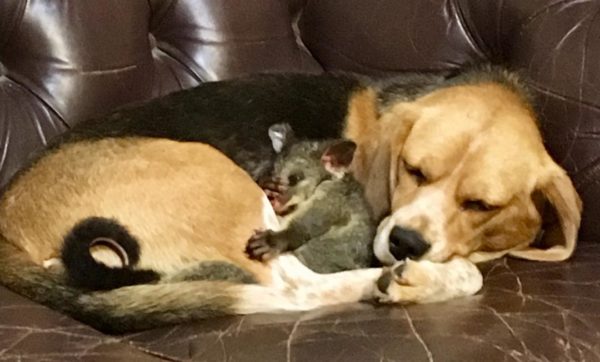 Since possums are nocturnal creatures, Poss sleeps for most of the day. However, this doesn’t stop her from spending time with Molly. She climbs in a tree to sleep, and Molly patiently waits for her on the ground.

When Molly and Poss are both awake, they spend as much time together as possible. Poss usually climbs onto Molly’s back, and lets her carry her around. Like any protective mother, Molly is always around to make sure Poss is safe.

How Long Will They Stay Together?

Even though Poss is like a child to Molly, she’s still a wild animal. She is free to go where she pleases, which is why she often sleeps in trees like a possum would. However, Poss doesn’t let her natural instincts stop her from being near her adoptive mom. 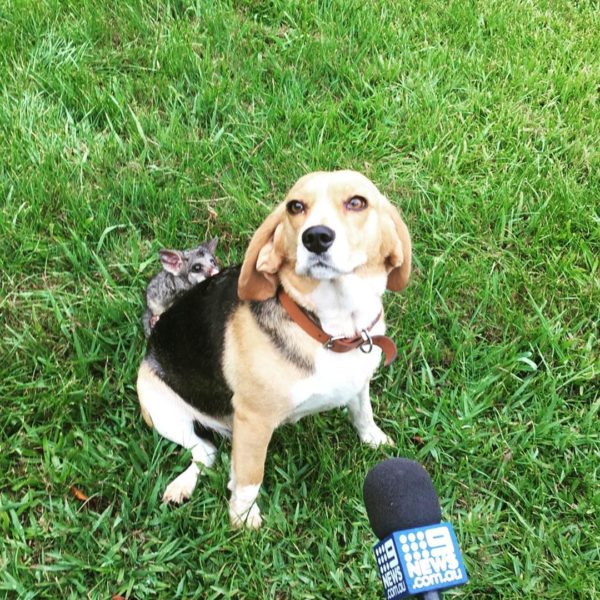 “It’s certainly uplifted [Molly’s] mood, they both needed each other, I think, so it’s been a fantastic relationship,” said Sara.

Once Poss is fully grown, Elle and Sara are unsure if she’ll stick around. But for now, they’re happy that Poss and Molly were able to find each other. After all, Molly’s excited tail wags prove that she’s overjoyed with the little possum.

Poss and Molly’s story has warmed the hearts of many animal lovers around the world. Elle and Sarah even made an Instagram page for them so that fans can stay up to date with all their adorable adventures!