Chained in the intense heat in a backyard which housed 367 dogs that were trained to fight to the end, these poor, neglected dogs were living in filth. The dogs had no access to food or water and sat in wire pens until the were let out to fight. The dogs were not even given names, only numbers.

When rescuers from the ASPCA found these emaciated animals, they were parched and severely malnourished. One dog in particular, number 205, caught their eye because he was elderly and clearly had had no other life besides this horrific one. He was a black Labrador-Shepherd mix that they named Silver because of his white whiskers.

Silver was missing patches of fur, and tested positive for heartworm and other tick-borne diseases. According to the ASPCA, this was one of the largest dog fighting raids in the history of the United States and Silver was believed to be owned by one of the defendants. The men who ran this dog fighting ring were prosecuted to the highest extent possible and are serving time in federal prison.

It is horrific to think that dog fighting still exists in this country and in many states, laws are not strict enough to enforce and force these inhuman people to be held accountable.

After several weeks in the hospital, Silver regained his strength and was able to overcome his disease with a treatment of antibiotics. Because of his age, putting his weight back on had to be handled with care. He was weak and this required caregivers to work to develop his muscle strength through physical therapy and a special diet. 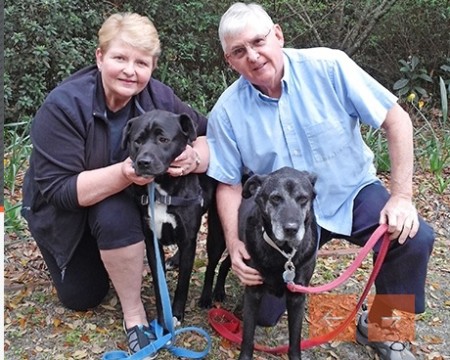 He lives in the country with his dog sibling, Buddy and his new people family.  They are a loving family that is willing to put in the time to help Silver gain confidence as well as weight!  He still suffers some anxiety and has trust issues, but loves his walks and chasing ducks in the lake near his forever home.

What a lucky guy to be able to spend his golden years in such a wonderful home.