On January 14, 2016, Brandon Turnbow from Burleson, Texas was out riding his Harley Davidson and had planned to meet his dad. The motorcyclist didn’t think he would to save and adopt a dog that day, but after witnessing a dog getting abused on the side of the highway, that’s just what this man ended up doing. 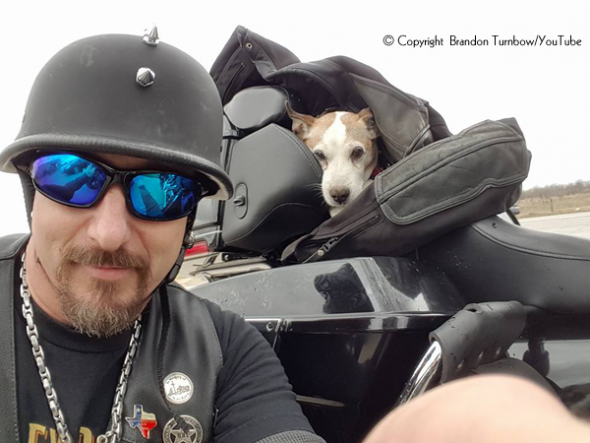 Turnbow was riding on Highway 171 near Cresson, Texas, when something odd caught his eye.

“[I] was riding out an saw a vehicle pulled over on 171 with a worthless piece of crap beating an innocent little white dog,” posted Turnbow on Facebook. “I watched in my rear view and saw this guy throw the dog into the air curbside and drive off.”

After the dog was abandoned, the hero rescuer went to check on the dog. Th pet was on the side of the highway, at risk of getting run over by other vehicles. Turnbow picked him up and quickly rode to catch up with the former abusive owner.

“I went after the guy just to give him a number one sign. And I now have a Co pilot- Meet Mr. DAVIDSON,” he wrote on his Facebook post. 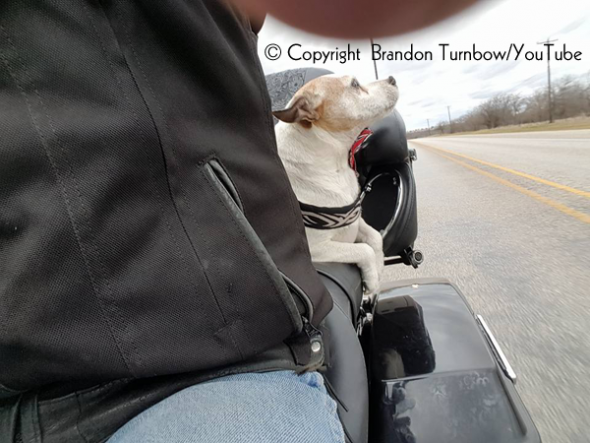 Mr. Davidson is one lucky dog. He now enjoys a pampered life full of love. When he is not lounging on a comfortable dog bed, he is playing with Turnbow’s other dog named Harley, or inspiring his musically talented new owner to write songs.

The rescue experience inspired the motorcyclist/musician to write a song. You can listen to it here.

No one knows what drove Mr. Davidson’s former owner to abuse and dispose of him in such cruel manner, but things happen for a reason, and if it wasn’t for that horrific experience this dog would have not ended in the loving home he is in today.

Thanks to Turnbow and his huge heart, Mr. Davidson now enjoys the good life