Sage is blind and beloved. And the night the Boulder Creek, CA, dog wandered into the forest — it was February 24 — her owners mistakenly thought she’d been brought inside for the night.

Beth Cole told reporter that neighbors and friends had helped her look high and low for Sage, but as days passed, their hope began to fade. Mountain lions had been sighted in the area and temperatures were precipitously cold. 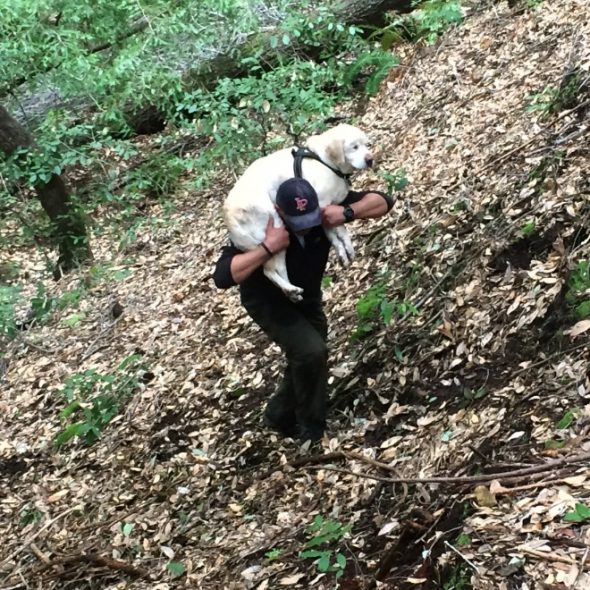 But then — the unexpected!

Cole’s neighbor, Dan Estrada was out hiking with two dogs and a friend, Victor Lopez, last weekend when they saw a white dog in a stream. They feared the Lab may be dead. 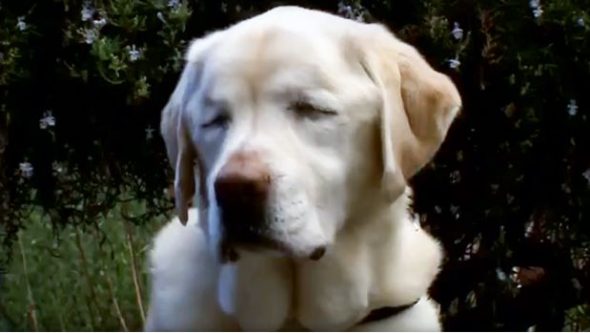 But when Sage sensed their presence — or perhaps that of the other dogs, she lifted her head.

Estrada said he was overcome with emotion, ran into the stream, and hugged her. Sage had not gone too far from home, but the terrain was challenging, steep and slippery. She was to weak to walk; Estrada carried her up the canyon on his shoulders. She is now back home and doing well.

“We’ve always loved our community, but this really re-enforced what a special place this is,” Cole said.

Estrada turned down a $1,000 reward from the Cole family, instead asking that they donate to an animal-based charity.

An event celebrating Sage’s safe return will be held on March 18 from 4-6 p.m. at Joe’s Bar on Highway 9. The event is a fundraiser benefiting the Santa Cruz County Animal Shelter.