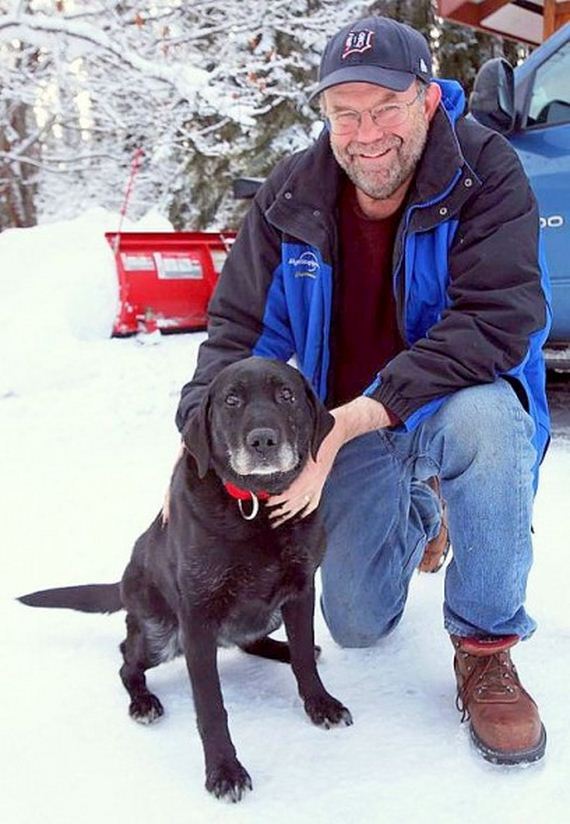 Temperatures had plunged well below zero when Madera wandered away from her Ester, Alaska home early in February.  Given her age and blindness, chances of finding her alive were considerably low.  But partly in thanks to another dog, Madera was found and is now safe at home.

On February 6th, Ed Davis’ wife let Madera out to relieve herself.  When it’s bitterly cold, she doesn’t dawdle, but for some reason, on this negative 40-degree night, Madera ambled away.  An autoimmune disease caused her to become blind, so no one would imagine she’d go far.

Davis was working at his job on a pump station for the trans-Alaska oil pipeline when she went missing, and had very little hope of finding her when he returned home on the 19th.

Davis doesn’t believe she’d have ever been found alive had it not been for Constantine Khrulev, who had been out riding trails on his fat bike, which is designed for rugged terrain like snow. He was accompanied by his own dog, who was wearing a bell.

Madera heard the bell, and whined as the dog trotted past her.  Khrulev in turn heard her, and ventured into the woods.  He discovered the 11-year-old Labrador seeking shelter beneath a tree.  She was 100 yards off the trail, half a mile from home.

“She was not going to be found accidentally,” Davis said.

Khrulev carried Madera to one of the Davises’ neighbor’s homes.  Though she had lost about 14 pounds, she was in surprisingly good health.  She will now be recovering under the watchful eye of her family in the warmth of her home.