You spend your entire life in a much-too-small cage. Flies, fleas, and ticks are constantly attacking your body and face. You receive just enough daily food to keep you alive – no more, no less. There is no way for you to contact anyone at all aside from those in the cages next to yours.

You sit in your own waste and have no escape from your small, sad prison. And then, the day comes when you’re finally taken out of your cell. You jump for joy and celebrate, believing you will finally be set free. But then, a cruel man hooks you up to a strange machine.

This man flips a switch, and you are electrocuted. You die. And then, your body is harvested to be eaten. Your whole life led up to this moment, and from the great beyond, you realize that there are millions like you destined to suffer the same fate.

This despicable scenario describes the harsh reality of millions of Jindo dogs in Asia. These sweet beings are born, bred, and raised on Asian dog meat farms. Their entire lives serve one sole purpose: to be killed, harvested for meat, and eaten. But why would anyone want to eat a dog? What purpose could this possibly serve? And in the year 2022, do people really still believe in this disgusting phenomenon?

Unfortunately, the answer to this question is a resounding yes. And though the movement to end this horrendous tradition is growing day-by-day, many still practice and believe in it. Dog meat harvesting is still, to this day, a bleak reality in many Asian countries. And more than seventy percent of these sweet dogs are killed in the days leading up to Boknal.

Boknal, commonly misconstrued as a festival or celebration, is a term used to describe the three hottest days of the year in Asia. These days fall between July and August each year and are dictated by the Lunar Calendar. And it is during this time, and the days leading up to it, many Jindo dogs are killed.

The meat harvested from these precious pups is used in a soup called bosintang. This soup is thought, particularly by older generations, to invigorate the blood, thereby causing an energy boost.

“Many farmers will have their dogs slaughtered just before Boknal when they fetch the highest prices,” says Humane Society International. “Meaning that the suffering of 2-3 million dogs every year is focused mainly on supplying demand for a soup consumed during just one month.” So far, seventeen illegal dog meat farms have been shut down for good, but many more are operable to this day. Millions of dogs all across the Asian continent are in desperate need of rescue. And though a rescue mission of such magnitude won’t happen overnight, we have reason to celebrate when even one dog is saved.

This year, we have twenty-one reasons to celebrate.

Just days before Boknal season began, twenty-one lives were saved in Gyeonggi-do, South Korea. This captivating rescue mission began when South Korean officials got wind of an illegal dog meat farm in the city of Ansan.

When Ansan city officials arrived, they discovered the existence of fifty-nine Jindo mixes. This farm had been breeding dogs on-site for human consumption for over six years. Officials were able to remove thirty-eight dogs from the farm, but twenty-one more were left behind. Unfortunately, city shelters did not have room to house the remaining twenty-one.

When two devoted rescue groups received news of the situation, they knew a rescue mission was in order. Humane Society International of Korea joined forces with Korea K9 Rescue. And together, the two groups drove out to the farm’s location to retrieve the abandoned twenty-one. Horror On The Dog Meat Farm

The scene that greeted them upon arrival at the farm was dreadful. Harvesting knives decorated a nearby table and the entire place smelled of waste and decay. The terrified twenty-one were confined to small, dirty kennels. They were very skittish and fearful of their rescuers. After all, they had never known a human that could be trusted.

Rescuers attempted to earn the trust of these petrified pups by offering sweet words of encouragement and fresh food. Once the dogs realized the pure intention of these strangers, they allowed rescuers to remove them from their sad, lonely cages. All twenty-one of these tortured souls were then transported to a local clinic for much-needed veterinary care.

Once these sweet pups are healthy enough to travel, they will be vaccinated and flown to North America. There they will be placed in forever adoptive homes. The man responsible for operating this illegal farm has signed a binding agreement never to farm dogs again. 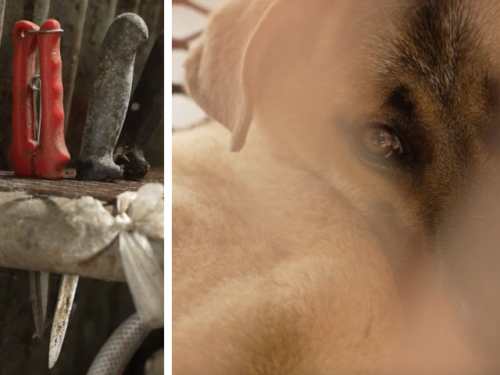 “This dog farm is typical of so many across South Korea where thousands of dogs are languishing in filthy, deprived conditions, enduring the unimaginable frustration of being confined in tiny cages their whole lives until they are brutally killed by electrocution,” said Sangkyung Lee of HSI Korea. “Thankfully, we are able to bring a happy ending for these young dogs who will receive all the medical care and attention they need before flying to North America later in the year to seek adoptive homes.”

This is the first Boknal season since President Yoon Seok-yeol came to office. He and his wife, First Lady Kim Keon-hee, are avid animal-rights activists with four dogs of their own. Both the President and his First Lady have voiced their support for the end of dog meat farming in South Korea. Animal-rights advocates hope that, backed by governmental support; they can finally end dog meat harvesting in South Korea for good.

“The belief that hot and peppery dog meat soup will reduce lethargy and revitalize one’s health during the summer is still strongly held in Korean society,” said HSI Korea. “So combating Boknal is not a matter of ‘banning’ a festival, but more about changing hearts and habits.” “We urge President Yoon to ensure the national government immediately takes action to end the dog meat industry,” said Sangkyung Lee of HSI Korea. “So that no more dogs like these will have to endure this suffering for a food that most people in South Korea no longer wish to eat.”

Fortunately, dog meat consumption has already been legally banned in several Asian countries, including Hong Kong, Taiwan, India, Thailand, and Singapore. And in a recent poll, we learned that 84% of South Koreans say they don’t or won’t eat dog, and close to 60% support a legislative ban.

A Mission Worth Fighting For

We can only hope that South Korea will follow in the footsteps of these forward-thinking Asian countries. Perhaps, together, we can bring about the end of dog meat consumption worldwide. Despite the remarkable strides made, more than thirty million Jindo dogs are being brutally killed each year for this dying convention.

“It’s important we keep pushing for reform and change to the agriculture laws within South Korea and effectively promote change from within,” said Gina Boehler, Executive Director of Korean K9 Rescue. “We are grateful for our collaboration with HSI and we know these dogs will go on to live a better life. We have seen and recognized the approval of most South Korean citizens who actively oppose the dog meat trade and lobby for change, which keeps our mission strong and alive.”