Luke is a 7-year-old with type 1 diabetes. When his blood sugar began to plummet while everyone was asleep (including him), none of the alarms were sounding, all tools intended to notify a family when the boy is in danger.

But when the technology didn’t detect the blood sugar low, Black Lab Jedi, who is a trained diabetes alert dog (DAD), jumped on and off the bed where Luke and mom Dorrie Nuttall were sleeping, eventually laying on the woman until she was up. 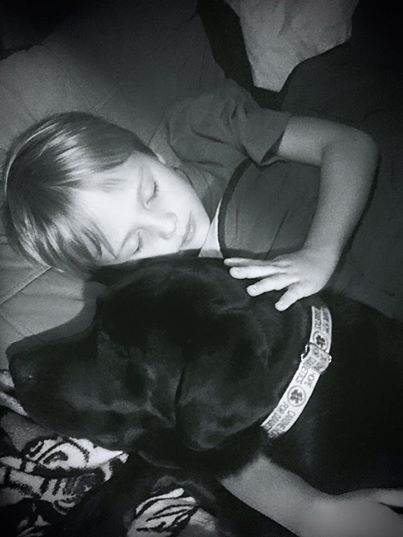 In her viral Facebook post, Nuttall describes the scene, and the nature of the disease: “No alarms were going off, no one was checking blood, no one was thinking about diabetes, and it’s in those moments when our guards are down, when we are just living life, when we let our minds drift from diabetes, that it has the upper hand-and things can get scary very fast…but thankfully we have a Jedi.” 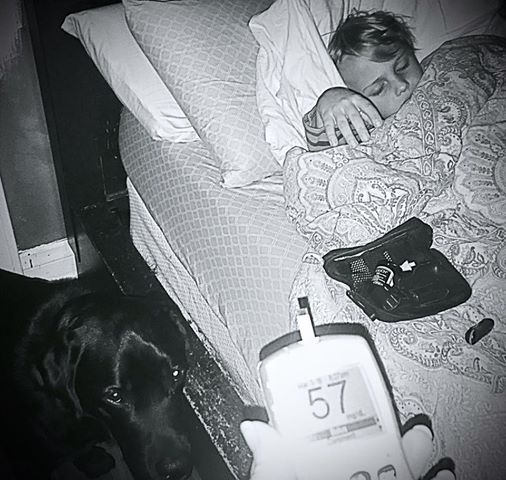 This may just look like a dog, a sleeping boy and a number on a screen, but this, this moment right here is so much more. This is a picture of Jedi saving his boy. Saving him from highs and lows and from ever feeling alone.

5 minutes before I took this picture we were all asleep. No alarms were going off, no one was checking blood, no one was thinking about diabetes, and it’s in those moments when our guards are down, when we are just living life, when we let our minds drift…

When Nuttall checked her son’s monitors, all seemed alright. But Jedi–with his “mind tricks” (or rather, sensitive nose) was persistent.

“I told Jedi we would watch and see, he bowed again (bowing is his low alert), I told him to get up on the bed, he held his ground didn’t budge, he refused,” writes Nuttall on the Facebook post.

She wrote, “Then I knew he meant business and the sleepy fog started to wear off and I began to think clearer. I suddenly was fully awake, and I knew there was an issue. I pricked [Luke’s] finger and got this; 57 is way too low, and by Jedi’s behavior I guarantee he was dropping fast (he is still recovering from a stomach bug and anything under 70 is low).”

“Luke was laying right next to me, just inches from me, and without Jedi I would have had no idea that he was dropping out of a safe range,” she added. 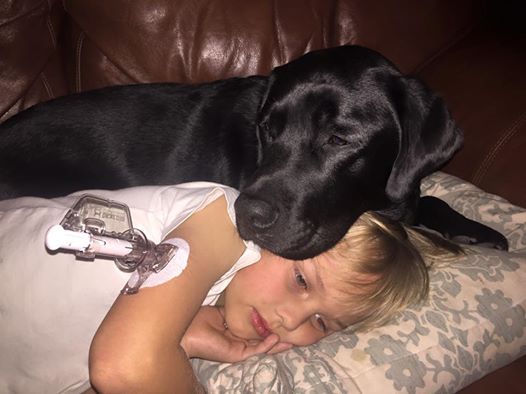 Life with type 1 diabetes involves high and lows and lots and lots of needles, every single day. We trained Jedi to alert us when Luke goes too low of too high. His alerts often beat the meters and he saves Luke from lots of the crummy feelings and health issues that go along with each (if you go back and look at our old videos and pictures you’ll see) but Jedi’s job goes beyond alerting, he also saves Luke from being alone, from being scared, he is his constant companion. …

Thankfully, the loyal and perceptive dog was able to awaken Nuttall in time to give her son a glucose tab in order raise his blood sugar levels. She explains that she snapped the photo of Luke and Jedi after she’d administered care, staying awake to keep an eye on her beloved son.

On the viral post, she wrote,”I took one second to take this quick picture – because in that moment while you’re waiting for your child’s blood sugar to come up like you’ve done thousands of times before and you’ll do thousands of times again, it’s very easy to feel alone in a world that doesn’t understand all that somebody with type 1 diabetes goes through on a daily basis. So in that moment I decided I would take a picture so I could later share this story, because if we don’t share our stories how would anybody ever know that this is what my son and millions of others go through every single day.”

When Luke was diagnosed with type 1 diabetes at the young age of two, Nuttall describes how she felt in an article by CBS News. “We don’t have a single member of our family [with diabetes]. I knew nothing about it. Nothing…A lot of kids die almost at diagnosis. People don’t know the warning signs,” she told them.

That’s why she decided to create the Facebook page, Saving Luke – Luke and Jedi – Fighting Type 1 Diabetes together. There, she can share Luke and Jedi’s story, bringing awareness to type 1 diabetes, and comfort to the families and the 5% of people living with the disease. 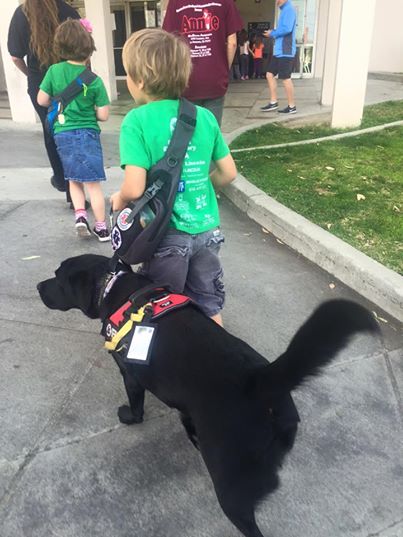 As it turns out, the appropriately named Jedi and his pal Luke make a great team. And now, the Black Lab can say that he’s a lightsaber–I mean, a life saver. May the Force be with you both! 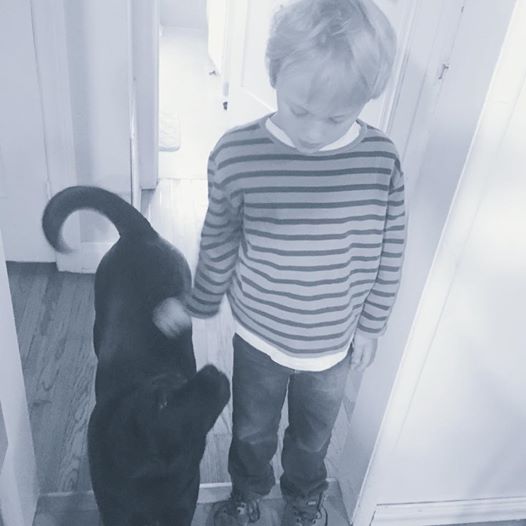 Jedi came home to us when he was 11 weeks old to be trained to be a diabetic alert dog. Luke was diagnosed with type 1 diabetes when he was two years old. We trained Jedi ourselves with the help of the amazing trainers at Canine Hope for Diabetics after we had been scammed by another company who promised us things they couldn’t provide. Self training was so much work but thanks to Canine Hope’s support it has been over 3 years and Jedi is a true hero to Luke and our family. Having a DAD isn’t for everyone, it’s not easy but for us the benefits are immeasurable.
Here Luke was getting ready for school and Jedi was bowing (his alert for low) Luke was 69. He alerts every time Luke leaves range and goes below 75 or over 150 which is 5-8 times a day. Every single day.