Getting a dog comes with many benefits, and many dog owners will be happy to list them for you.

Just having our pups around lifts our spirits. After all, there’s a very good reason they are often trained as therapy animals, bringing comfort to patients in hospitals and veterans of war.

By adopting them, we learn an important lesson in responsibility. Caring for them is akin to raising a child in many ways. We feed them, play with them outside, and groom them regularly. And when they’re sick, we rush them to the vet.

Another benefit of having a dog? They’re extremely protective of their owners. Should their humans get into any trouble, they have no problem intervening to save the day.

But this loyalty can easily be confused for being protective, as one homeowner found out the hard way.

Two burglars had no problem entering Debbie Blakey’s home, despite the signs warning of two fierce dogs inside.

Cameras that Blakey had installed caught every move: The two men enter the kitchen area, and her pups run up to them. However, they’re not confronting them the way she had hoped. Instead, they approach them with their tails wagging. One of the burglars even stops to pet one of the pups. 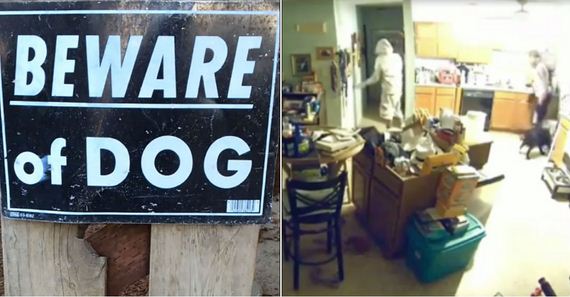 In the end, the intruders got away with a few of Blakey’s valuables. She learned that dogs aren’t protective of places, but of their owners. She was absent during the break-in, which explains her dogs’ behavior!

But the homeowner says that, despite losing some precious items, she’s just glad the dogs weren’t harmed in any way.

Please SHARE to pass this interesting information on to fellow dog owners!