A video taken on a Toronto subway shows a woman lashing out at her dog by hitting and biting it. Thankfully, the other passengers weren’t going to just sit around and let it happen. Roxy Huang recorded the video had this to say:

“It happened today, Aug 4, 2017, on TTC. I just finished work and got on TTC at Bloor-Yonge station. This trash non-stop hits her dog bites and pulled its hair. I was so furious to see her abuse her dog. After few mins, a man walked to her and asked her to stop, meanwhile, a man walked to driver’s room. The whole train stopped, more than 3 TTC staff walked to her and then she got off the train. Someone like her should never own a dog or a pet.”

Fair warning, the video is a tough one to watch.

UPDATE: The Ontario SPCA has charged and arrested the 37-year-old woman.

“We are grateful for the public coming forward with this evidence that allowed us to conduct this investigation,” says Connie Mallory, Chief Inspector, Ontario SPCA. “The public must remember that video evidence is only one part of an investigation. A full investigation into the matter is what allowed us the opportunity under the law to remove the dog and lay these charges.”

We’re glad to see that actions have been taken against the woman. The Chinese crested dog has seen a veterinarian and is doing well. 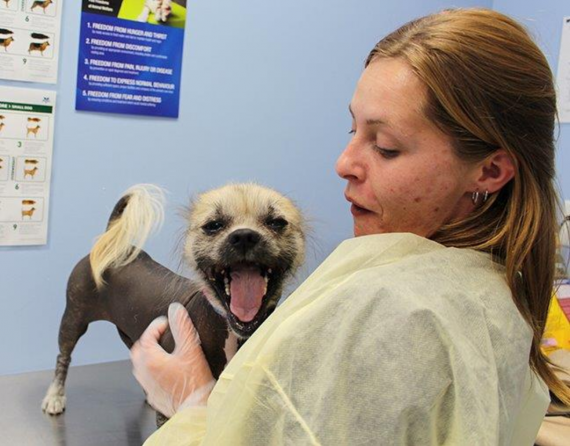