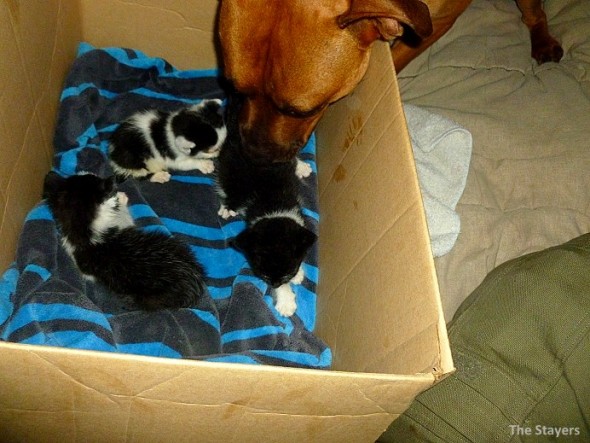 This comes from my mom, Karen Edwards:

Over the past several years, my rescued pit bull mixes, Spartacus and Loki, enjoyed their daily game of trying to catch the feral cats who sometimes took refuge in my old shed in my backyard.  They were very curious about these mysterious creatures that eluded them no matter how fast they ran after them.

On July 6, 2015, their curiosity would be satisfied.  My son Eric was in the driveway that evening around midnight, and he heard a little kitten mewing.  It was a little white kitten with black spots similar to a dairy cow.  He brought the baby kitten inside, and I instantly fell in love with it.  Meanwhile, in our neighbor’s yard, two more kittens from the same litter were found, another boy, and a little girl.

My son decided to name them Allen, Bidwell and Elmwood, after some popular cultural streets in downtown Buffalo.  They did well, for the most part, taking to being bottle nursed, but shortly started eating wet food to satisfy their ravenous appetites.  Unfortunately, Elmwood, the little girl, failed to thrive and passed away one night, and we buried her in the backyard after a solemn memorial for her brief but love-filled life. 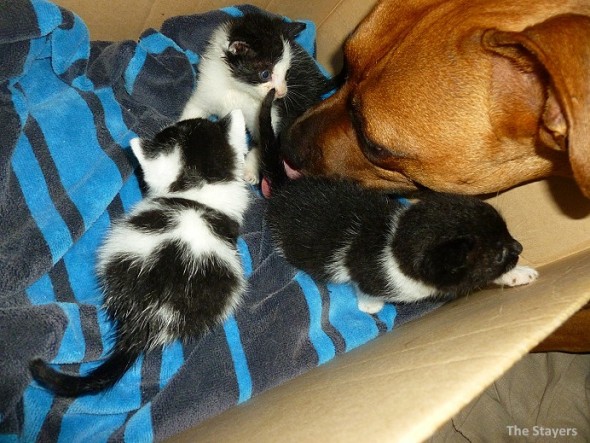 By a stroke of fortune, the very evening that we buried Elmwood, I was in the back yard checking on things before going to bed.  As I was walking back toward the house, out from the weeds along the fence behind my shed came bounding another little black and white kitten, and I scooped it up.  It was another girl.  I laughed and said, “hey, I thought we buried you!”  I immediately named her Zombie Cat.  The cats have been given names that I have chosen, since I care for them all, and they are (Edgar) Allen, Boris Bidwell, and Zelda Zombie Cat.

Back to my dogs – who loved to chase cats – they have now been forced to deal with cats face-to-face on a daily basis.  I wasn’t sure how long the transition would take, but it has been much easier than I thought.  Spartacus, the older dog, basically ignores the kittens and walks away from them when they start to swat at his tail.  Loki, on the other hand, has become the official nanny dog for all of the kittens, and he licked them like a mother cat right from the beginning.  He has taken a special liking to Zelda, the little girl kitty, and she snuggles in and purrs against his face, and kneads his back with her claws just like in the Merry Melody cartoons with the bulldog and the kitten.  The transition couldn’t have gone better, and now my home is teeming with three energy-filled, affectionate kittens and two dogs who got what they asked for—an education, close up and personal, about the mysterious creatures called cats. 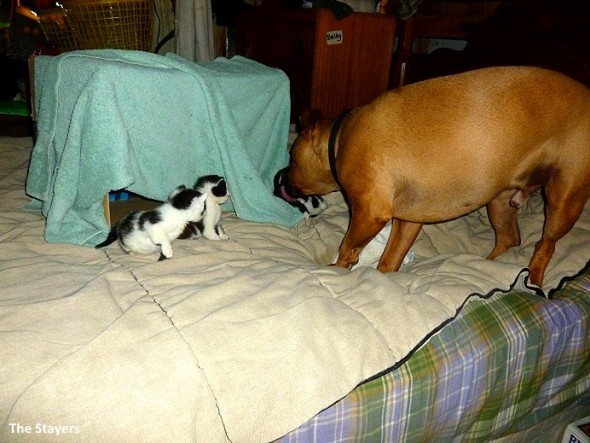 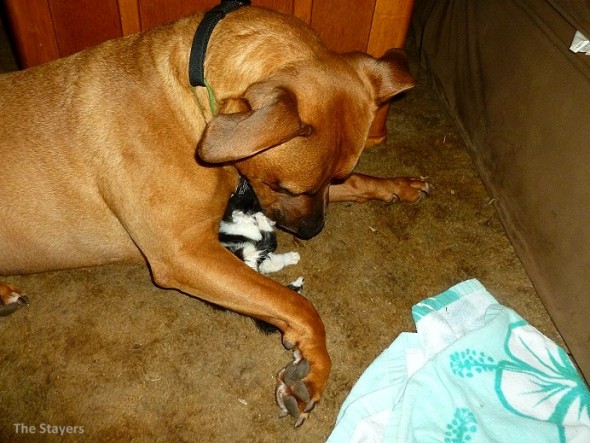 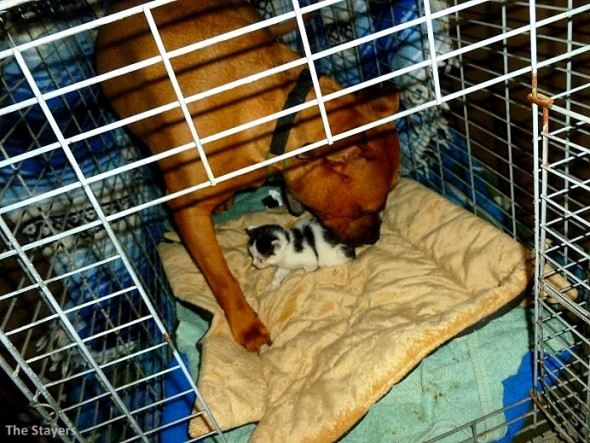 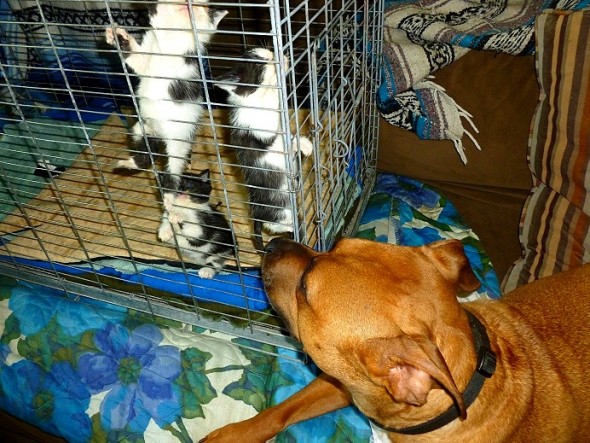 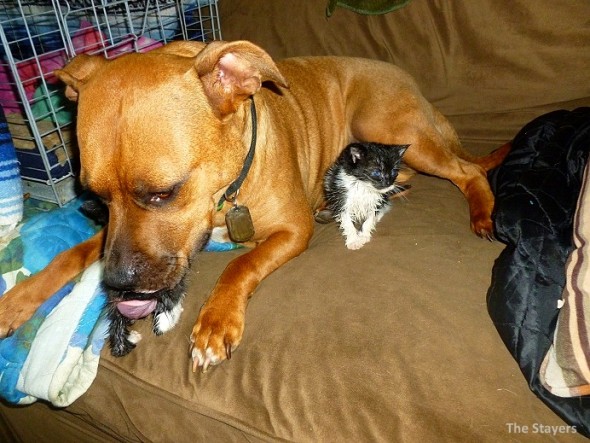 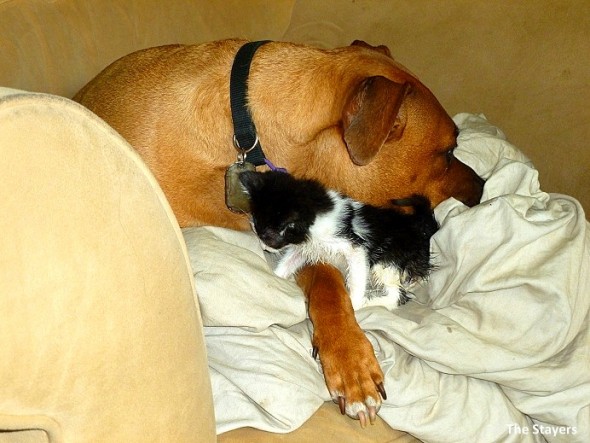 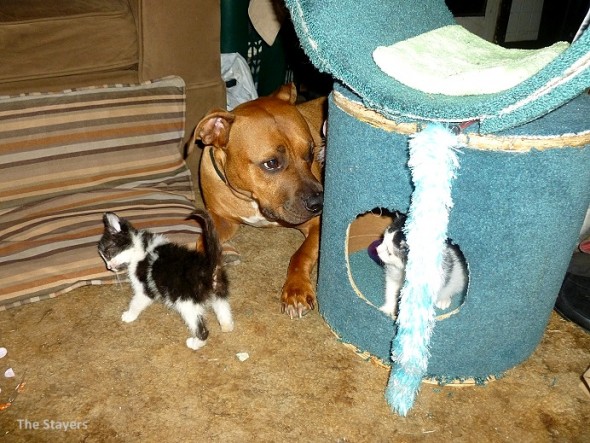 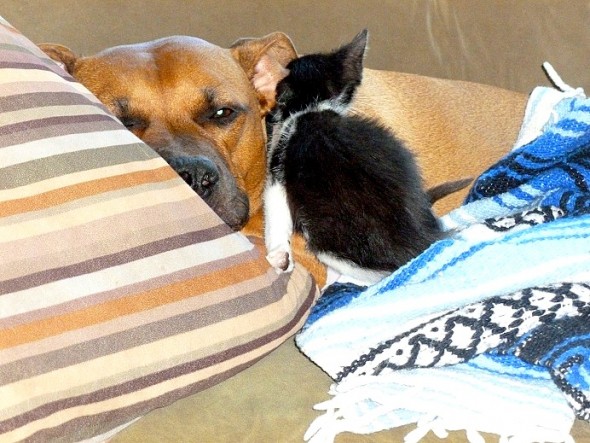 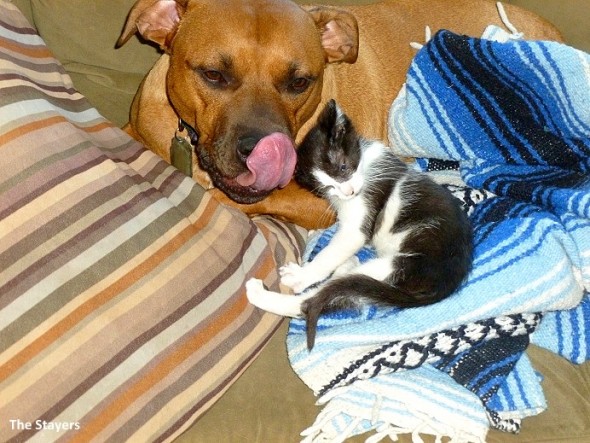 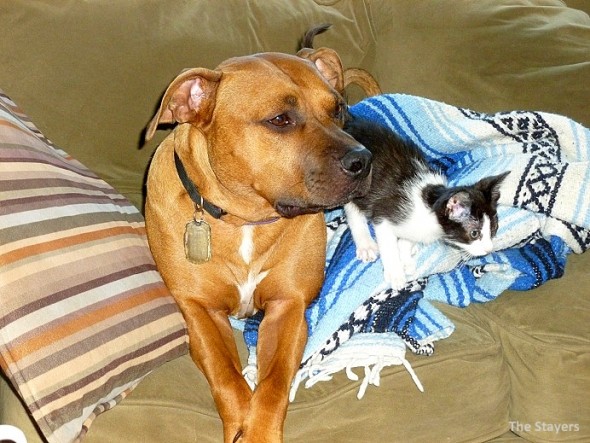 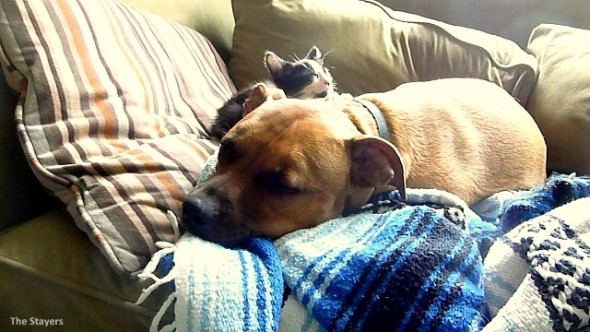 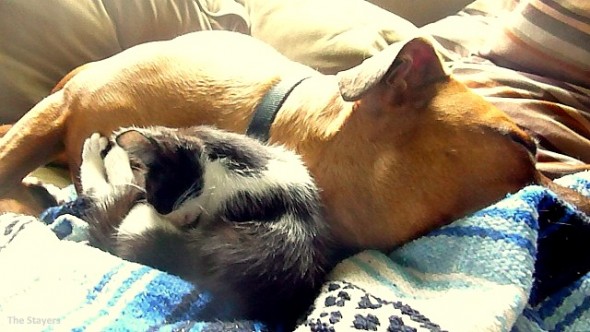 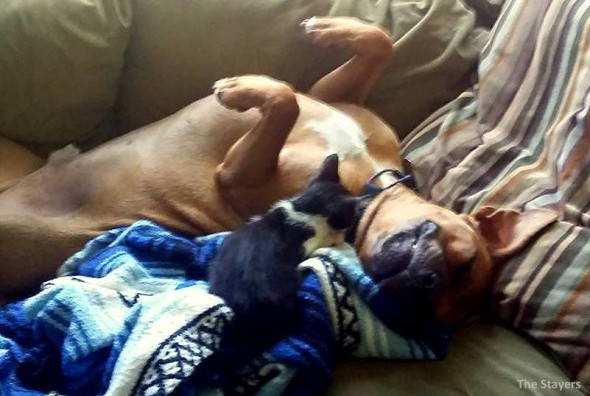