Poor Boo! This one-year-old Chihuahua was dropped off at the Miami-Dade Animal services, or MDAS, which is a high-kill shelter, and things are not looking good for her.  We at Life With Dogs are hoping to raise some adoption awareness regarding this shelter, and all other high-kill shelters out there. 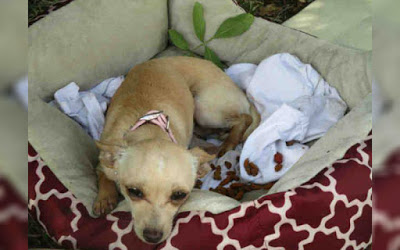 Things weren’t going to be easy for Boo right from the get-go.  The person that promised to love her forever just decided that they didn’t want her anymore.  Instead of rehoming Boo on her own, she just gathered all of Boo’s stuff and took her to MDAS.

Anyone familiar with MDAS knows that little effort is put into finding homes and caring for the animals they have.  It has one of the single highest rates kill-rates of any shelter in the area, and many other shelters across the United States.  Often, the animals surrendered there or picked up by them off the streets have just a few short days to be adopted, and they’re euthanized quickly.

We’re coming to you our readers in the hopes that you’ll share Boo’s story, and maybe someone out there in that area could rescue poor Boo.  We know we have the most loyal dog lovers as readers, and you guys always come through for us.  Thank you so much for all of your help in the past and going forward.  If you or someone you know is interested in giving this precious pup the forever family she rightfully deserves, please contact the Miami-Dade Animal Services at (305) 884-1101 and reference the shelter ID #A1852012.