Three cheers for one of Colorado’s finest: K-9 Officer Lex of the Adams County Sheriff’s Office. 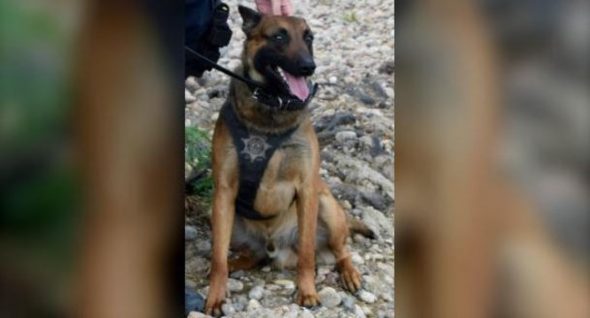 The dog is being hailed as a hero after coming to the aid of his partner. The pair were on duty when the Sheriff’s deputy (Lex’s handler) responded to a trespassing call and began questioning a man — who then attempted to flee, jumping a fence.

The deputy ran in pursuit of the suspect — later identified as Gabriel Steven Garcia, 25 — and became separated from Lex. The two men began fighting and, according to the sheriff’s office (as reported by CBS Denver) Lex unlatched a gate with his paw to come to his handler’s aid.

With Lex at the scene, the suspect was able to be apprehended and has been charged with attempted first-degree murder and assault in the attack on the deputy. Garcia is scheduled to appear in court on Aug. 31. The deputy was treated for his injuries at the hospital and is home recovering.

“Our deputies view canine Lex as a hero for saving the day. We appreciate everyone in the K-9 Unit and their hard work to keep us safe,” said Adams County Undersheriff Harold Lawson in a Facebook post.