Jet, a 2-year-old pit bull/lab mix, had his loving owners, siblings Toby and Francine Dattola worried for more than 12 days. The beloved pet got lost after being in a car accident that scared him and made him run away. Fortunately, his owners and the Pequannock, New Jersey, community worked together to find Jet and bring him back home.

According to a North Jersey report, Jet had been taken away from his home by an estranged family member. This individual handed the canine to a friend who was involved in a car accident when transporting Jet while driving drunk. The dog fled the scene and for the next 12 days avoiding people and capture. 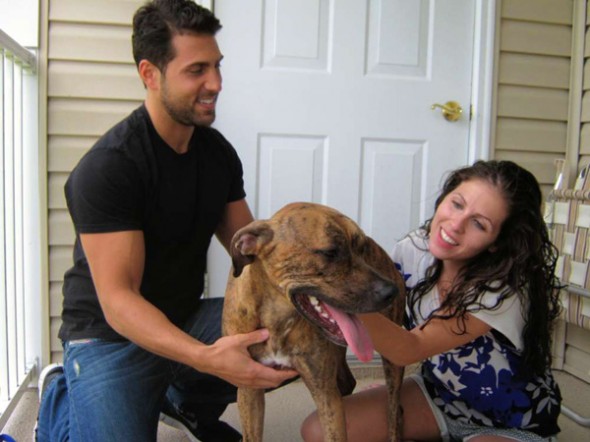 Since the accident happened, community members reported seeing Jet near the north end of Pequannock, but no matter how many times the Dattola siblings and concerned pet lovers searched the streets and the nearby woods, the dog was never captured.

On Sept. 4th, a Riverdale resided spotted the allusive dog near the Pequannock-Riverdale border and contacted Toby. Soon, “Eddie the Trapper” and private investigator Jordina Thorp, mapped out a plan to successfully capture Jet and bring him back home.

A live trap was set and with the help of some tasty roast beef sandwiches set as bait, a thinner, tired and hurt Jet walked right into the trap.

The next morning the Dattola siblings were reunited with their beloved and greatly missed pet.

While lost in the wilderness Jet suffered insect bites that caused minor infections, his paws were badly scrapped, and he had been sprayed by a skunk, but his veterinarian determined the dog was in good health and just needing some TLC.

Bringing Jet home was only possible because many pet lovers in Pequannock stepped in to help.

“I had no idea people cared so much,” said Toby Dattola. “We were devastated, and we just can’t thank everybody enough.”