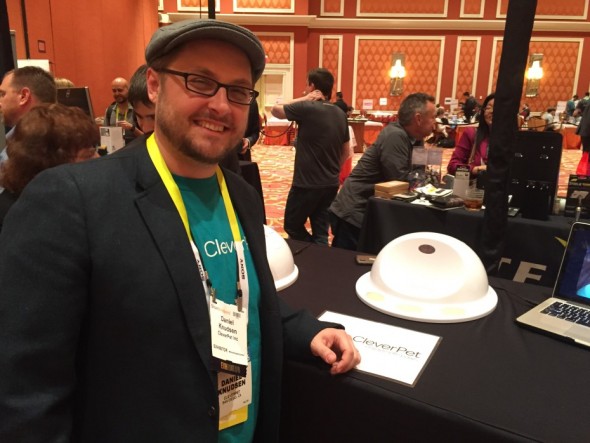 When one thinks of video game consoles, one usually thinks of companies like Sony with their popular PlayStation devices, or Microsoft with the X-Box systems.  These may be entertainment for humans, but what about entertainment for your dog?  Well, the recent Consumer Electronics Show (CES) brought not another console for people, but one for your dog.

The company that had developed the device is called CleverPet.  They brought their CleverPet Hub to the CES, billing it as a game console for your dog.  Similar to the classic board game “Simon,” that tasks players with hitting the right color buttons in the proper sequence, getting more and more difficult as the game goes on.

Chief science officer and cofounder of CleverPet, Daniel Knudsen gave an interview to VentureBeat at the CES.  He believes that the new device will not only be a fun new toy for your dog, but a learning tool as well.  In a way, the device might actually provide some training for your dog, theoretically making your dog smarter.

“The dog has to hit the right button at the right time to get a bit of their food for the day,” said Knudsen.  “There are some dogs that take a little longer than others to learn.  The basic science for interacting with animals has been around for 100 years.  It started with Pavlov and continued with B.F. Skinner.  We did this by putting it in front of a lot of dogs.  Frankly, we haven’t reached the end of what they can do yet. There’s a lot more that we can do.”

Aside from being fun, the device will also allow humans to program it.  You can interact with the device via a computer, and pre-program routines into it.  You can also include verbal commands that the dog will hear.  Having the ability to hear you voice may also help with nervous dog, calming anxiety attacks when you’re not around.

CleverPet is taking orders for the device at $269.  The first units are set to ship as soon as April.  While the startup company has done well for itself, gaining new financial backers and some key founding members, the tsk for the company now is convincing people that this is something they want.  Knudsen admits that may not be the easiest thing to do.

“The hard part for now is convincing people that a game console for dogs is not a ridiculous concept,” Knudsen said.  It will be interesting to see if this is something that will pan out, or if it will become one of many cool tech-toy ideas, that ultimately never finds a market.  Only time will tell.

Check out CleverPet’s video, describing how the device works below.  What do you think?  Would you buy a video game console for your furry family members?