The world is constantly moving and we are all in a state of change all the time. For humans, it’s easier for us to cope and understand, but for rescue dogs, it’s a whole different story.

They don’t understand why their best friend isn’t there with them anymore, but they wait. Despite being scared and confused, they hope that someone comes back.

Just like our furry friend here who was left to survive all alone after his owner disappeared. It’s a good thing that Hope for Paws was notified and immediately came to rescue him.

Every month, the team of Hope for Paws is asked to help pets find loving forever homes after their owners passed away unexpectedly and no instructions were left for the care of their pets. They said that many of these pets end up in shelters, but most of the time they’re just thrown out to the streets to fend for themselves. Oftentimes, the pets are scared and confused as to why they’re alone. 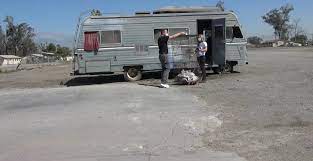 On June 10, they received a call informing them about a dog that’s been left by an RV trailer. Immediately, the rescuers went to the location and saw the dog under the trailer. According to them, the dog and the owner used to live in the trailer until the owner suddenly disappeared.

When they arrived, they kept a safe distance, making sure that they didn’t scare away the dog. After assessing the situation, they figured that the fastest and safest way to get the dog was for them to set their humane trap by the trailer.

After hauling the cage, they placed a towel inside for the dog’s comfort, as well as a trail of dog food to lure the pup inside the cage.

From a distance, they watched as the dog slowly emerged from the space under the trailer and followed the trail of food. In no time, the cage snapped closed and the dog is now safely inside.  The rescuers were even surprised at how quick that took them.

They ran back inside the area and made sure that the dog was okay. Upon reaching the cage, they saw that he chewed on the spring of the cage door which the rescuer said no other dog has ever done before. The dog didn’t show any hostility or aggression towards them, in fact, he seemed happy someone was finally there for him.

They’ve coordinated with L.A. Animal Rescue (LAAR) and made sure that the dog will have a place to stay. The LAAR also suggested that they name the furry friend Klaus. He remained calm throughout the rescue. They had to move fast since the heat was quite unbearable and it would be best if the dog was in a more comfortable space.

Gently, yet swiftly, they moved the cage toward the fence that was near their vehicle. Successfully, they were able to carry Klaus over the fence with the help of the rest of the team and a worker who offered to lend a hand.

Making sure that he’s not dehydrated, they offered Klaus water, which he refused to drink. He was still very nervous around them, but he did show signs that he was happy someone found him.

At the hospital, they gave him a bath and had the VET check him up. The rescuer took this time to comfort and reassure Klaus.

When dogs are abandoned, they never fully understand that they are, but they eventually become aware that they’re all alone with no best buddy anymore. It slowly takes a toll on them and it makes them very anxious. Rescues like Klaus need gentleness and assurance in order to trust again.

They brought Klaus to where the other rescues were and although he seemed shy, he slowly got along with the other dogs. As well as slowly trusting humans again.

Many dogs out there are going through what Klaus went through or even worse. 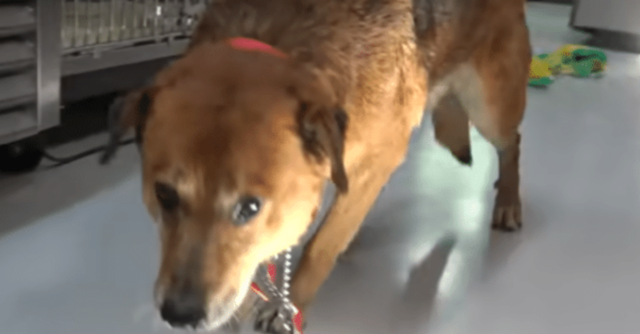 Dogs are lifetime commitments and cannot be left to fend for themselves when owners cannot handle the responsibility anymore. Having plans for your pet is an incredibly important thing that all fur parents must take into consideration before deciding to take the additional responsibility of taking care of another life.

There are many rescue dogs waiting for their stories to be heard, if you want to know more check out hopeforpaws.org and ilovemydogsomuch.com.

The full video is below for you to enjoy!