A police officer from Alabama drove a dog called Kai 770 miles to reunite her with a grieving family. McKenzie Catron, who was just 19 years old, was killed in a motor vehicle accident while on spring break. Her car when off the road and into a utility pole. Sgt. Jonathan Whaley was the first to arrive on the scene, and was alerted to the dog being involved as well. Not only did the officer get the dog, but made sure the dog was brought home.

“We felt we needed to find the dog,” said Sgt. Whaley. “We were going to do whatever we needed to do to reunite this dog with this family.”

After securing the scene, police, firefighters and other emergency personnel searched the area for the missing dog. A Facebook group was formed to help out, and coordinate search efforts. There was even a $1,000 reward offered to anyone finding the dog.

Once the dog was found, they had problems corralling her, and getting her into a car for transport. It took eight people to do it, because the dog was so confused and frightened. Regardless of difficulty, everyone involved knew how important it would be for McKenzie’s family to have her dog, so they absolutely refused to give up. Eventually, someone got a hold of her collar, and got her under control.

Benjamin Irwin is the family’s lawyer. He said, “I just know if I were them I would want the last tangible thing of someone I loved.” It was Irwin’s law firm that footed the bill for the $1,000 reward, and have decided to take that $1,000 and donate it to the shelter that Kai was adopted from.

In order to get Kai back to the right people, a trip of 770 miles would have needed to be taken. So as not to put that on the family, Sgt. Whaley drove the dog himself. Catron’s family may never be the same after what has happened. However, they do have Kai, and that does seem to make things a bit easier for them. 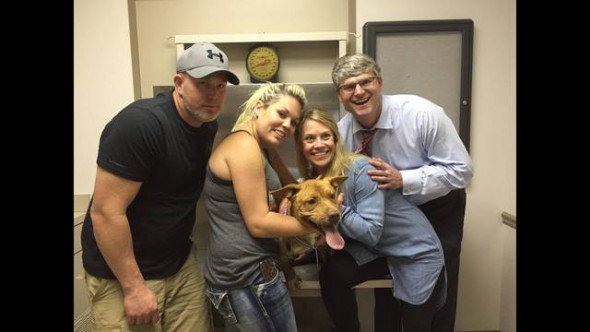