Emily Trost and her boyfriend Nick Mazzone had always dreamed of embarking on a cross-country road trip. So when they graduated from college and Emily left her office job, they knew it was the perfect time to have a 10-week adventure! Emily told iHeartDogs:

“We hit the road, his truck loaded with supplies, and our lives soon became much simpler than they ever had been. We slept in a tent every night, made all of our meals on a Coleman stove, washed our dishes in a bucket, and showered outside in the woods. We traveled to so many National Parks and National Forests and spent as many days as we could hiking.” 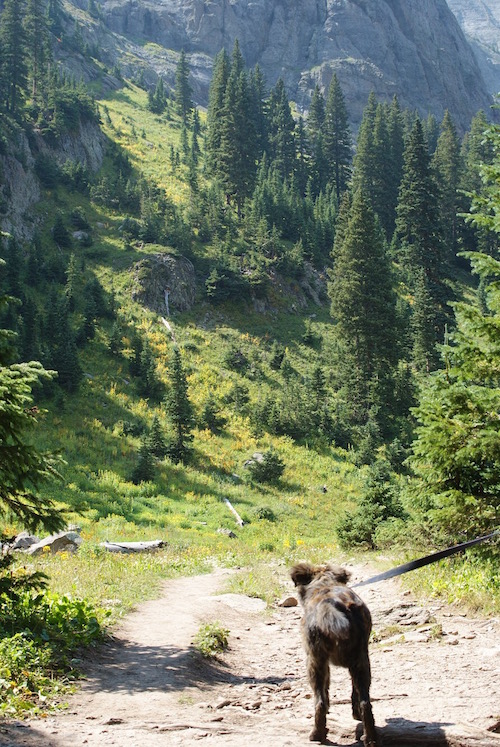 But despite all that they’d planned for, they didn’t anticipate meeting a stray dog who was going to capture their hearts.

While stopped at a gas station in Browning, Montana, the couple walked out of the convenience store to find a brindle puppy sitting next to their car. At first, they didn’t think much of it, assuming that she belonged to a fellow traveler. 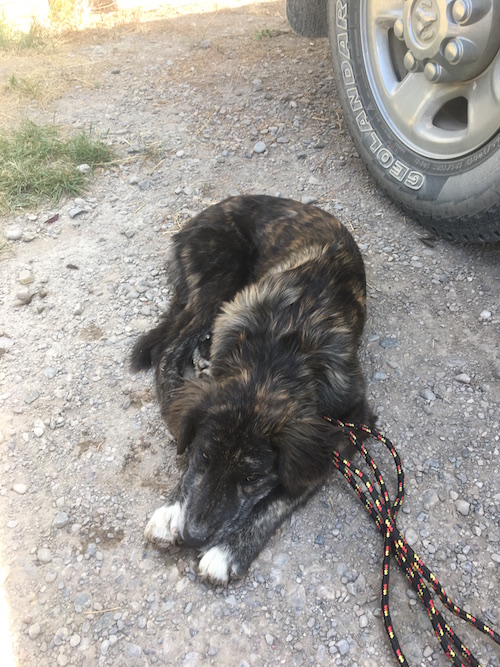 “Our initial thought was that she was the pet of someone else using the gas station. I went up to her and started petting her. My boyfriend and I went around to others at the gas station asking if she was theirs. We also waited with her to see if somebody came out of the gas station store to claim her. Nobody did and as we were waiting we realized how dirty she was with thorns, twigs and prickles all caught in her long hair and our hearts broke for her.” 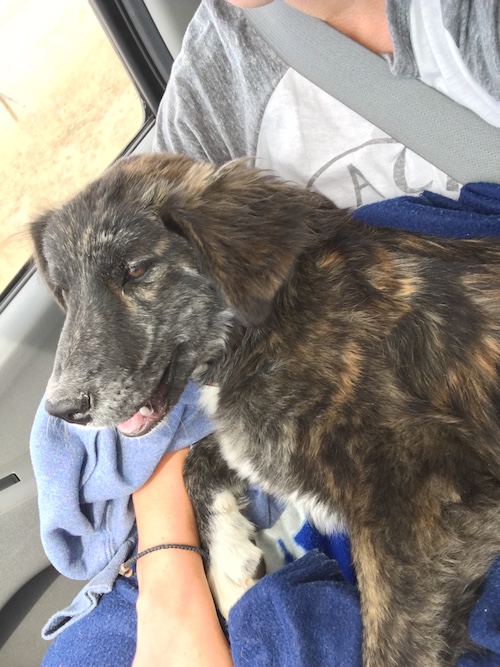 “Eventually a woman local to the area pulled over in her van asking us to please take her home.  She said she feeds the strays in the area, that they’re wonderful dogs that deserve a good home.” 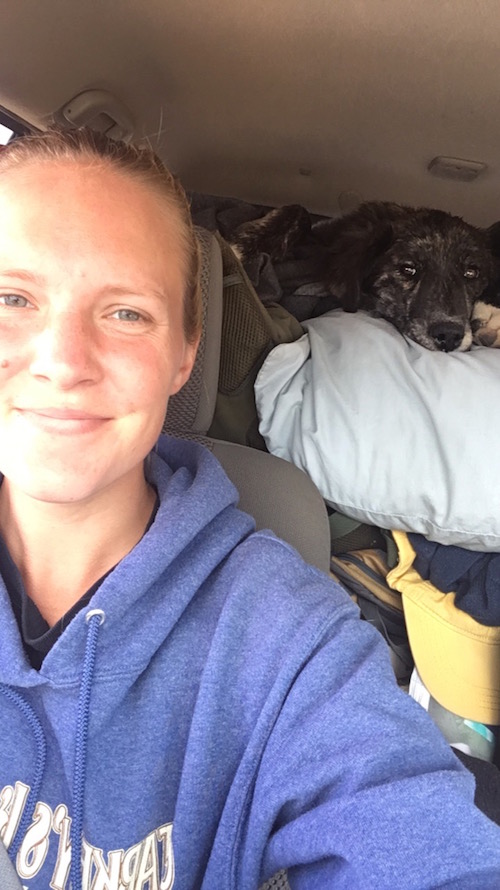 Emily and Nick agreed to take the dirty stray along with them, deciding that they’d search for a vet and a local rescue to take her in. But it wasn’t long before plans changed.

“Within minutes of driving away with her in the car, we knew she was coming home with us.  We drove to the next major town and stopped at a Petsmart to get her a leash, collar, dog food, bowls and a tag with her name on it.” 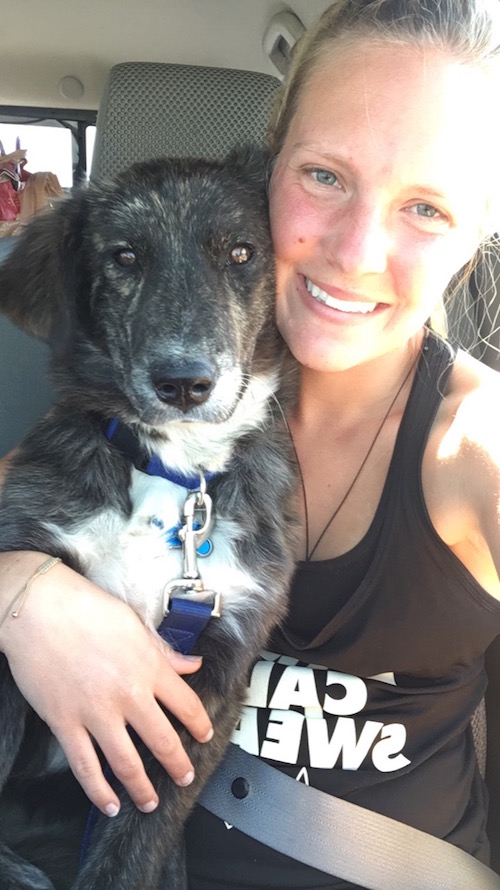 They named the pup Montana, after the state where they found her.

The couple’s new companion joined them for the rest of the trip, cuddling in their sleeping bags, accompanying them on hikes, and riding in the car while cozily snuggled in the passenger’s lap. 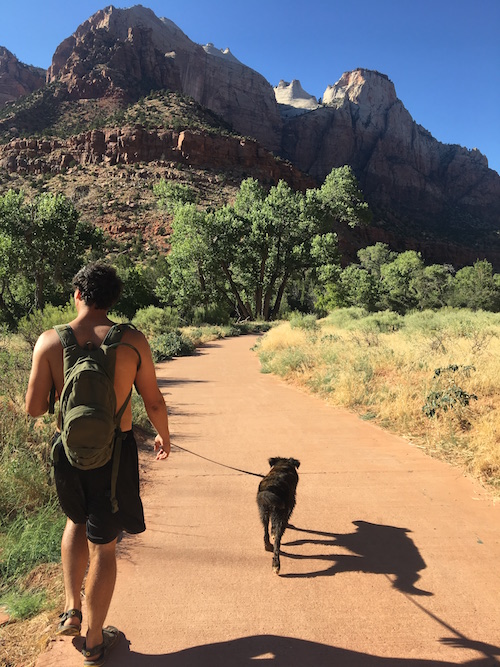 “It’s as if she filled a space in our truck, tent, and hearts that we never knew was empty,” Emily said. 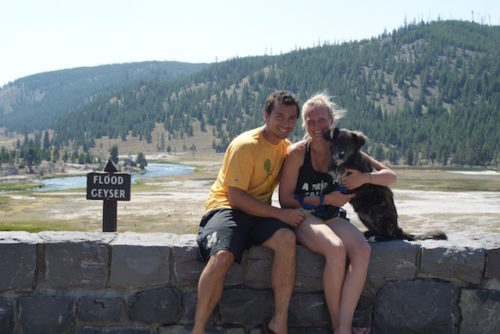 When the trio returned home, Montana was thrilled to meet her two new furry siblings.

“Montana is very playful and social with other dogs, so she’s been having the time of her life since we returned home from our trip since there is always another dog around for her to play with.” 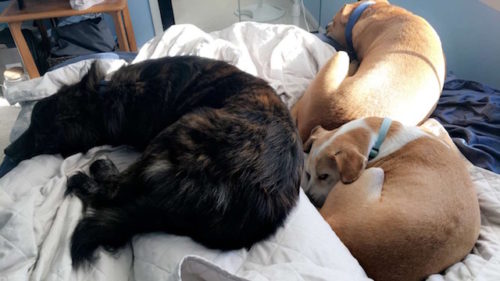 It’s been a little over two months, and the newcomer has settled into her family and come out of her shell.

“She’s goofy, quirky and loving with a lot of energy. We call her the jumping bean.” 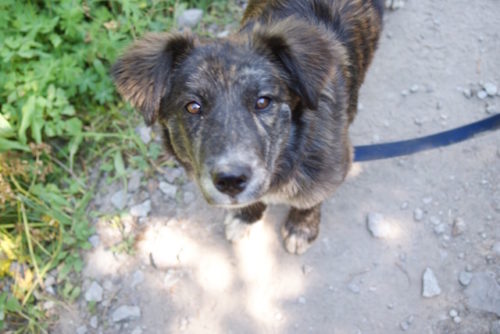 “We also like to say she’s ‘street smart’, but not so much ‘house smart’, but she’s learning quickly from our other dogs at home! She loves to play with toys, jump in the pool, run around with other dogs. She follows my boyfriend Nick and I around everywhere and likes to give us her dog bowl when she’s done eating. She hates being told ‘no’ and will even throw a tantrum by ‘yelling’ at us, but she does learn quickly!” 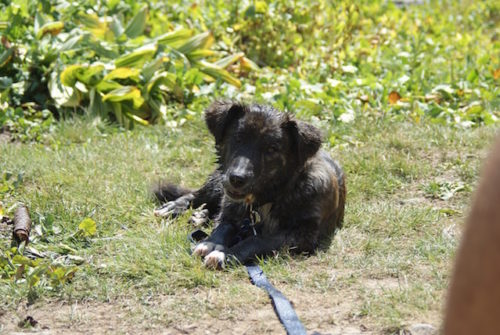 We’re so glad that sweet Montana has finally found her forever home – and Emily and Nick came home from their trip with the best “souvenir” ever! 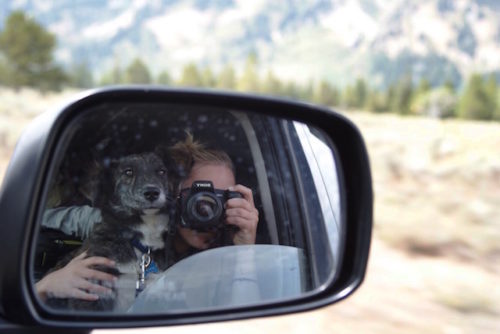 Emily also says that she hopes her story helps more homeless dogs get rescued, especially the friendly strays that live where Montana was found.

“I  would love to bring more awareness to this problem,” she told us. “There are so many stray dogs on and around this Indian Reservation in Browning and they all deserve to be rescued.”

Special thanks to Emily Trost for letting us share this wonderful story!