Joanna realized her calling four years ago when she took in a hedgehog who had been kept in a cage with another male hedgehog and was in terrible shape. Male hedgehogs, like other male animals, will fight if left together. Banjan needed care, as he had lost ears to fighting while with his previous owner and was covered in fleas and mites.

In the months it took to nurse him back to health, Joanna and her partner, Rory, fell in love with rescuing animals. Their work with furry, feathered, and scaled creatures benefits several of their local rescues, including Doolittle’s Animal Rescue and Freshfield Animal Rescue in the UK. The two have taken in several pets in need including birds, ducks, cats and dogs, and have had a few foster fails in the process! 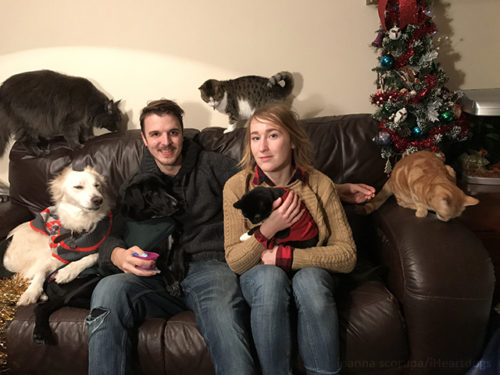 The wellbeing of pets is never far from their minds. While on a trip to Bulgaria, the couple carried dog food with them to feed the overwhelming number of strays they saw wandering, homeless. Their souvenir was a skinny street dog they rescued from a busy motorway. He later joined them in the UK after being brought up to satisfactory health by a British foster family in Bulgaria working with Doolittle’s Animal Rescue. Shuck, as he was named, is now healthy and happy in his new family. 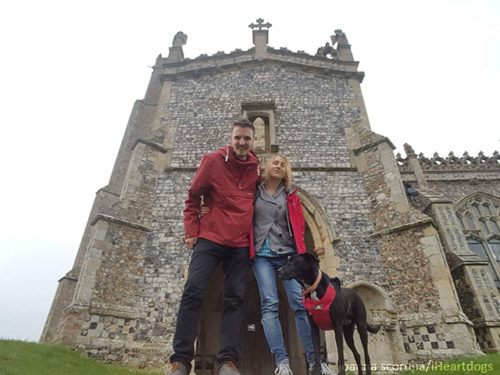 Although there’s lots of love and happiness to be gained by rescuing and fostering animals, it comes with some heartbreak as well. Joanna and Rory’s latest foster has come with it all.

They heard about Migoi through the Bulgarian family that fostered Shuck during his recovery from his life as a stray. Still just a pup, Migoi had suffered shocking, unspeakable abuse. He was kept as a “guard dog” outdoors in the cold on a short chain. When he was rescued he was underdeveloped for his age due to malnutrition and lack of exercise, beaten, and his ears and vision were taken from him by his cruel owner.

Migoi was being cared for by a woman in Bulgaria named Maxime, an experienced foster who cared for over 40 dogs just last year. A family was lined up in the UK to adopt him, but while waiting to be transferred they suddenly changed their mind, saying he was “too ugly.” 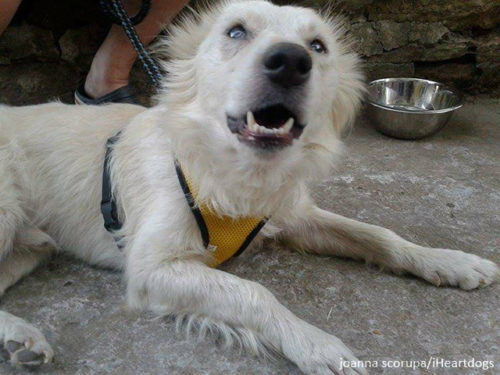 Without hesitation, Joanna and Rory offered to take him in as a foster. They knew it would be a challenge to nurse him back to health and learn to care for a blind dog, but they also knew that they could give him the love he had always deserved. 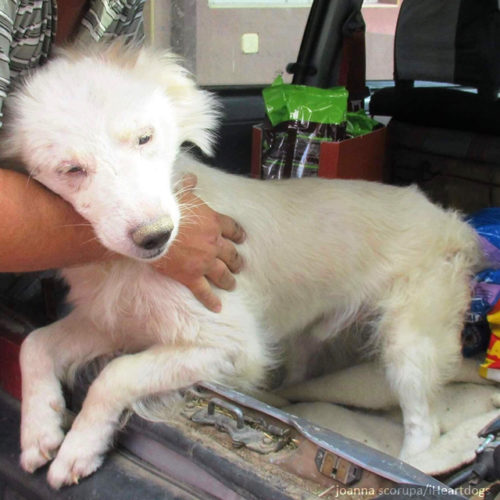 Though some dogs will be skittish around people after having only known abuse, Migoi was ready to be loved! Joanna tells iHeartDogs, “Despite all of that he is the sweetest boy, absolutely in love with people.” 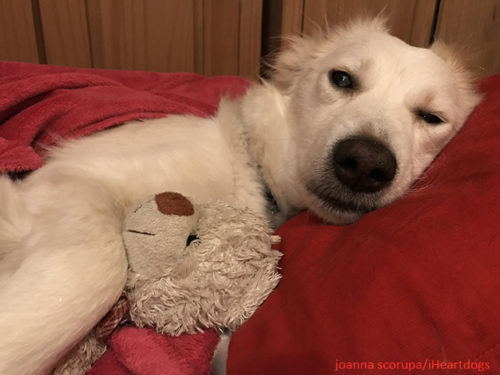 “It’s been a tough few months to nurture him to health and learn how to take care of a blind dog, how to protect him and help him gain confidence. We installed baby gates to keep him away from the stairs, removed from the house anything that could be in his way or a potential risk. We got him a fountain so he can hear where is the water and put scented candles around every other water bowl in the house. We learnt how to let him know there’s an obstacle in the way.”

“The most challenging of all has been the fight for his eyes, it took a lot of time to contain the severe eye inflammation caused by the damage to his eyes. We recently learnt that he also has retina detachment and glaucoma in his right eye, which means we have to remove it. It was a big hit, but it made us want to fight for his other eye even more, he has a surgery scheduled for the next month. A surgery that will return vision to one of his eyes and will give him back what another person decided it was right to take away from him.”

Joanna and Rory did everything they could to give Migoi confidence to move around their home even though he couldn’t see. They succeeded in helping keep him safe and got him the medical attention he needed, but there were other challenges they faced that they didn’t expect, and weren’t sure how to resolve. Luckily, another family member was ready to step in to help. 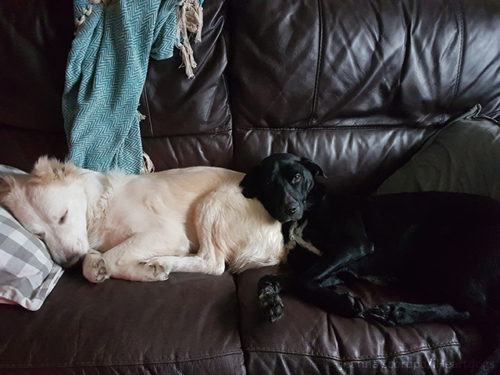 “Before Migoi arrived we had been told that he was a bouncy boy and needs extra attention. The first day he was pretty much bouncing off the walls, he was making so much noise and rumpus. We were too worried to leave him alone for a second… Only once we got to know him, we realized that’s how he shows he’s stressed. He would cry every time something spooked him or bark at any strange noises or dogs, it was always visible that it’s fear, not aggression.

“One of the saddest things was to discover that he did not know how to play, he had no idea about what to do with the toys we offered him, but it wasn’t us who were able to explain it, it was Shuck…” 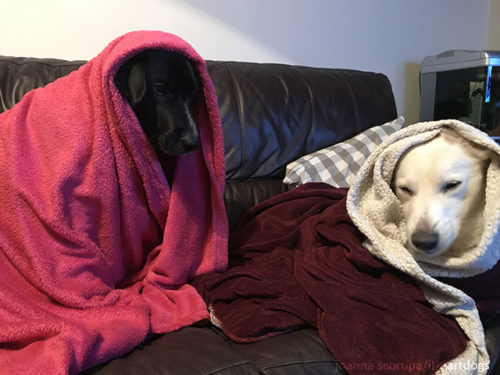 “…He patiently takes care and guides his little brother. He teaches him how to be more confident [and] Migoi returns the favor by helping Shuck to come out of his shell. Initially, Migoi struggled with his confidence, he was terrified of other dogs… The very first breakthrough came thanks to our dog walking group at the park. Once Migoi realized that all those dogs are friends with his big brother Shuck, he decided to make friends too.” 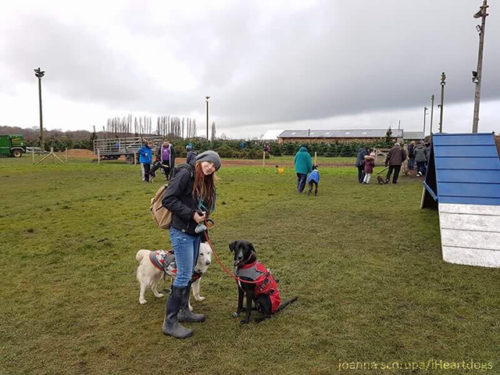 “Every time we take Migoi to the vet, we take Shuck along too. The bond between them grew so strong that he’s pretty much a support dog for Migoi, keeping him calm all the way through.

“Migoi will stay forever with us, there’s no question about that. We are really bad in fostering and we can’t imagine giving our baby boy away! We are hoping that the surgery will save one of his eyes, which should help with his confidence. Once he’s ready we are planning to take him together with Shuck to backpack around Europe.” 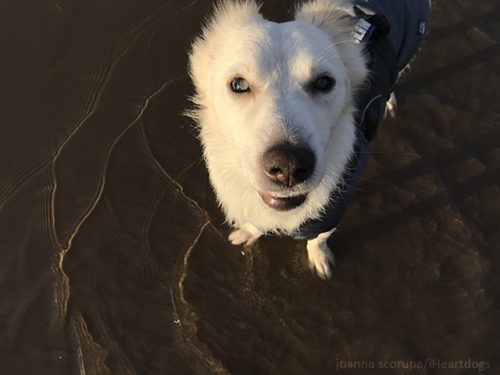 “We strongly believe that Migoi should be able to live the same life as any other dog, he should be able to run free and play off the lead with other doggos. Working through his confidence issues and teaching him commands for obstacles allow him to be that dog.” 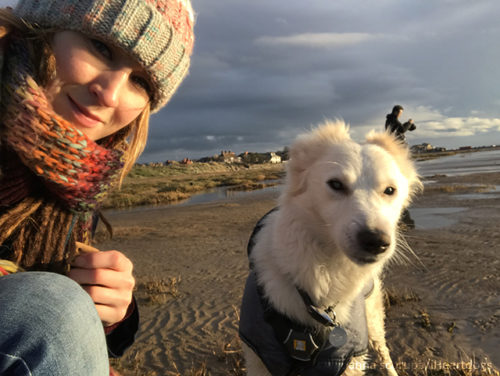 “We don’t think that his blindness should limit him in any way as it shouldn’t limit any other blind dog… If Migoi can do it, any dog can do it. Of course it’s harder and takes more time and vigilance to keep him safe, but that’s our job as his parents.

“Our boy came a really long way within just a few months and he still has a long way to go, but we will support him every step on the way.”