When a small dog was in grave danger of drowning in the icy water of a lake in Crimea, while others stood around watching, one fearless man stripped down to his skivvies to dive in and save it.

A crowd had gathered to observe the scene that was taking place at a lake in the city of Simferopol.  The dog struggled to stay above the surface, hypothermia rapidly setting in.

One brave fellow disrobed and took a moment to steel himself and assess how best to approach the situation.  He looked like he wanted to dive, but there was a thin sheet of ice between the dock and the dog, so he sat down and dunked his feet, which must have felt like they were being stabbed with a thousand icicles, before fully plunging in. 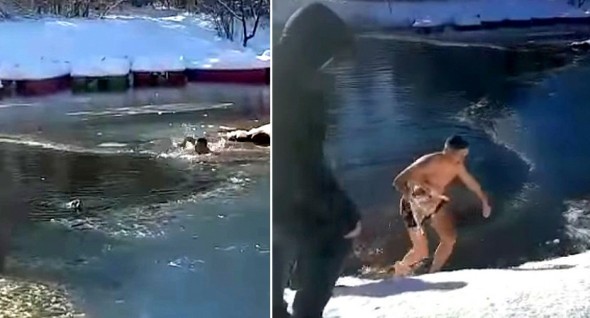 For a terrifying moment it appears that the dog will drown, as it bobs under the surface.  Though freezing and drowning to death are infinitely more dreadful, it seems the dog is more frightened by the approaching savior.

After a bit of splashing about, the man steers the near pupcicle towards the shore.  Once at the edge, he triumphantly emerges from the water with the dog cradled in his arm like a salami.  Onlookers helped them up the snowy slope and cheered for the man who saved the day.

The dog is wearing a collar, so it’s very likely that it was brought home and warmed up.  Hopefully it will think twice before approaching any other icy lakes!