Dulce, a two-year-old deaf Dalmatian-Pit bull mix available for adoption through Mercy’s Door Pet Rescue in Cleveland, Ohio, became a hero last week, when the pet alerted her foster family about carbon monoxide gas inside the home. The dog saved the family even before the alarm went off. 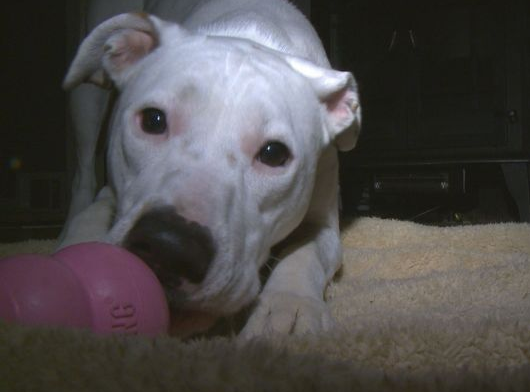 Foster mom Ashley Shuckerow told WKYC News the on that Thursday morning, the dog was not acting like her usual self and was making “a lot of racket.” Shuckerow went to investigate what was wrong with the dog and when she went to the home’s lower level, the woman realized the house was extremely cold. The furnace had malfunctioned.

A repairman was called to check on the furnace and it was him who told the Shuckerows they wouldn’t be alive if it wasn’t for Dulce’s trained nose.

“The guy said the carbon monoxide [was] probably flowing into our house,” said Shuckerow, “[Dulce] sensed it long before we ever would have.”

The furnace was replaced and all family members and dogs residing in the house are no longer in any danger.

Shuckerow says that because Dulce is deaf, her remaining senses are stronger. It was that special quality in Dulce that saved their lives.

If you want to give Dulce a permanent home, contact Mercy’s Door Pet Rescue and give Dulce what she has been longing for – a home of her own.