When rescuers found the petite pittie mix they came to call “Gwen Stefani,” she was one of 14 saved from a suspected dogfighting operation in Texas last month.

“When I walked up, the rest (of the dogs) were all jumping and wanting me to come pet them and love on them,” Madeline Yeaman of the SPCA of Texas, told The Dodo. “But I saw her and I immediately grabbed our veterinarian …. She was at death’s door.”

Scrawny, dehydrated, stooped and bent from the massive tow chain attached to her collar, she was found tethered to an old car axle, covered in sores, flea bites and with no protection from the excruciating Texas sun.

Anemic from flea bites, weak from all her struggles, Gwen stole the rescuers’ hearts and they were determined she get to know the loving world beyond the end of her chain, to know kindness. 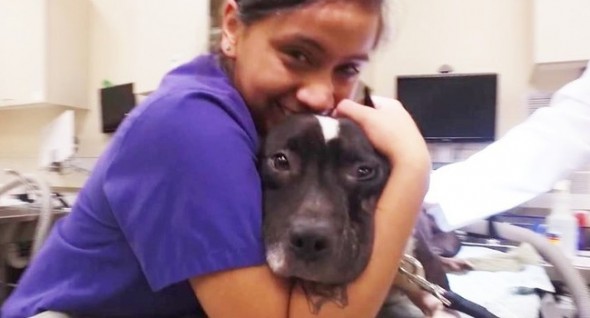 “The first couple of days that she was walking around on a leash,” Yeaman said, “she didn’t really know what it was. She hugged the wall because it made her feel safer to have a barrier against her.

“But as she kind of learned her little path of walking and learned that she was going to go outside and play, she began to get more excited and began to come out of her shell — and really just shine.”

“A lot of the basic things that you think about for a pet dog is all new and foreign to her,” Yeaman said. 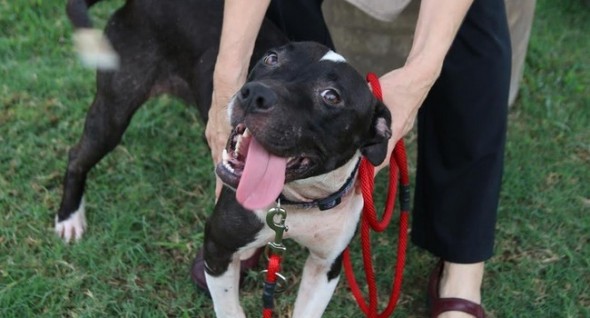 “She’s definitely not missing anything. She’s got people loving on her…. She gets to go play outside all day long,” Yeaman says. “It’s amazing what a change of environment and care and people can make in a dog’s view of the world.”

Now, she just needs one more change in her environment. A forever home. Visit Gwen’s adoption page if you’re interested! You can also call the SPCA of Texas at 214-742-7722.

See Gwen in action here and learn how you can help on September 22, North Texas Giving Day: