In the world of “nobody cares about this stuff” (except that everyone does, and so keeps reading it, and that’s why it’s all over the Internet, folks!), details have emerged about Prince Harry and Meghan Markle’s new mystery dog.

We reported about the alleged new rescue back in August, but the information was scant at best.

Scant it certainly remains. The royal “IT” couple has been stoking the fires of mystery surrounding this new pooch since then and of course, people are just out of their mind to know. The new dog’s existence has been confirmed – of this we are certain – but the name? That’s still for them to know and us to find out.

That said, during a very busy day visiting Sussex with Prince Harry for the first time, Ms. Markle let slip that the dog’s gender was female with an offhand remark that people keep “getting her name wrong.”

Indeed these two are a dog-centric couple, now increasingly known for stopping to pet pooches while they’re out and about, meetings fans and subjects. In fact, Harry was recently over heard saying, “My name is Harry. I have two dogs with my lovely American wife,” referring to both their new addition and the beagle Meghan rescued in 2015, Guy.

Later, a stop at the Survivors’ Network, a Brighton-based group for survivors of sexual abuse, the royal couple was gifted with a unique and thoughtful drawing featuring the rescue pup. Though at first, they didn’t realize who was in the cartoon.

“We had a local artist do an intersectional feminist print of your dog,” meeting director Jay Breslaw said, presenting the framed photo to the pair.

Immediate reaction said they’d though the dog depicted was the new one. There was laughter. “No one’s even seen our dog!”

“How lovely!” Meghan said as she examined the drawing. “Look at the little freckles on his face!” 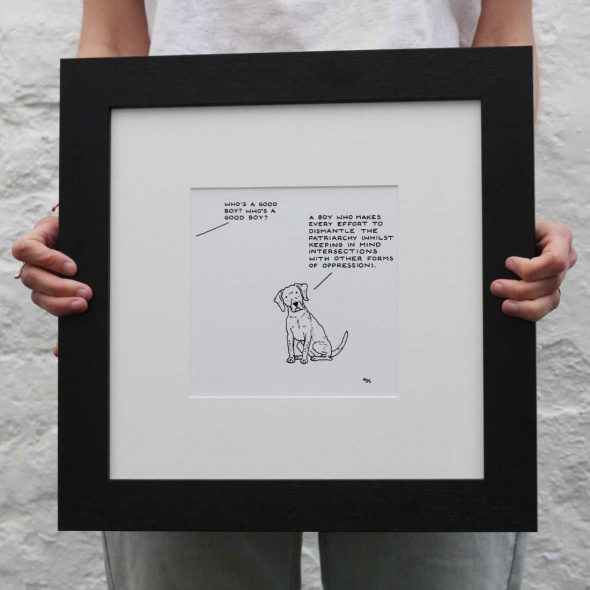