Last month when the blizzard struck the east coast, two stray dogs, likely brothers, endured it together in New Jersey.  One of them had gotten shot, and the other stayed by his side until they were rescued.  Now they need a home together.

According to David Ramirez of the Liberty Humane Society, the pair were spotted traipsing about Jersey City’s Liberty State Park a few days before the storm hit.  When animal control officers attempted to capture them, the black dog allegedly lunged, and the officer shot him in self-defense.

He was not critically injured, and the dogs bolted.  Animal control set up a live trap, and days later, as the area was battered by wind and heavy snowfall, the boys were caught.

“I absolutely believe the two truly needed each other to survive at the time,” Ramirez told ABC News. “With one having been hurt and bleeding and then with the blizzard coming down, there was definitely a time crunch to capture them and get them to medical care.” 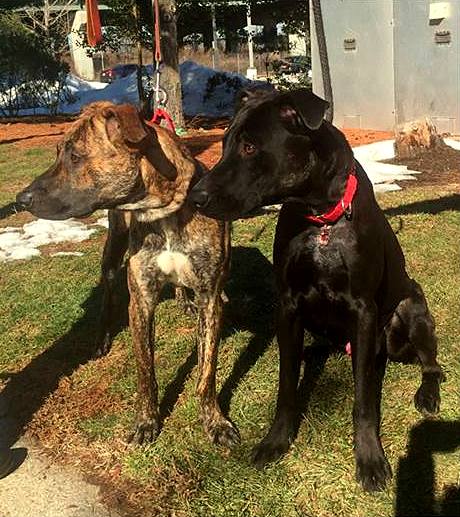 The black dog was taken in for surgery, and it was determined that the bullet had exited his neck and didn’t cause any major damage.  They were then put in the care of Liberty Humane Society.  Staff called the black dog Braveheart for his steel nerve, and the brindle dog was called Faithful for the allegiance he showed to his friend.

Workers believe they have such a good rapport because they may be littermates.

“While Braveheart was away, we had a miserable Faithful on our hands,” Ramirez explained. “He was crying relentlessly for Braveheart, and it was immediately obvious how bonded together they were.”

Last week they were reunited, and “everyone could sense their relief when they finally saw each other again.” 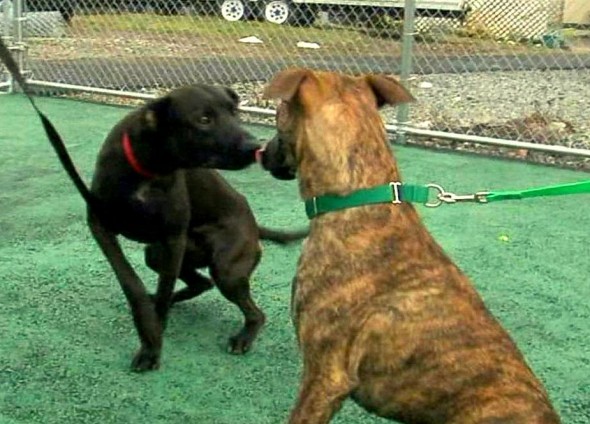 “They’re very well trained,” Ramirez noted. “They knew a lot of commands like sit, stay, down and roll over, so we’re thinking they may have come from the same home. Neither were microchipped.”

The shelter is hoping someone will step up to give them a home together, as it’s obvious that separating them would break their hearts.

“It’s really hard to imagine them without each other at this point, especially after all they have been through,” Ramirez concluded. 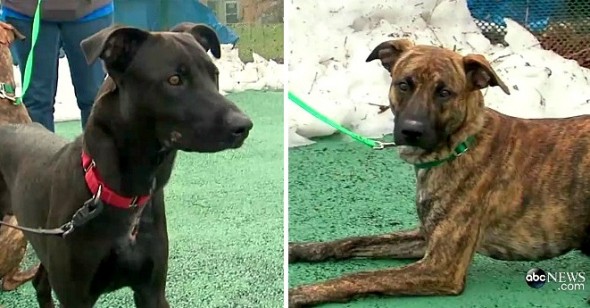