“Gwinnett County Jail Dogs” program is a special initiative that allows prison inmates to reform themselves by training dogs for their forever homes. A paralyzed dog named Bandit has recently become the program’s most special dog owing to his life-changing experience with the inmates.

Bandit is paralyzed from the waist down, which heavily affects his mobility. But Bandit’s inmate caretakers have toiled hard for months to help him get his independence back. With the help of a custom-made wheelchair and some rigorous training, Bandit has overcome his disability like a true warrior! 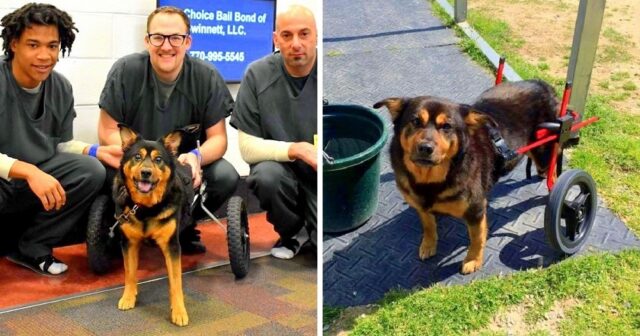 The inmates who trained Bandit to consider him to be the smartest dog ever. However, they have witnessed the disturbing trend of people adopting disabled dogs just to surrender them later. In a short time, Bandit has been adopted and returned by many families. It’s so unfair to him!

Bandit’s trainers and the program coordinators are now requesting people to consider adopting this special-needs dog. He has been through a lot and he deserves a home that never abandons him again. Let’s spread the word and make sure he gets a true forever home this time. 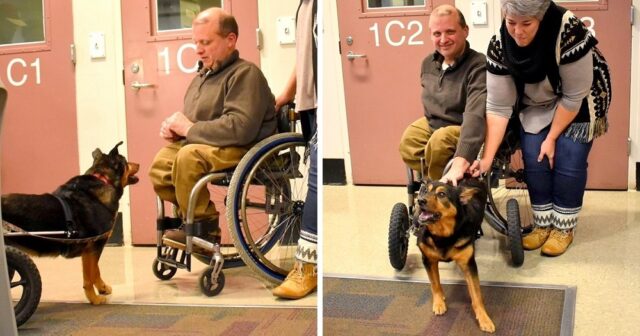 Update: In a happy update, the program coordinators have revealed that Bandit has been adopted! Bandit was ultimately picked up by Darryl Rider, a wheelchair-clad man who suffers from a paralysis similar to the pooch. It seems like this pair was made for each other! What a perfect happy ending for both!

Click the video below to watch Bandit’s story of struggle and his journey to his new home!