An Aurora, Colorado family who almost had their dog taken away from them, because authorities thought the dog was a wolf/dog hybrid, are breathing a sigh of relief today.  Thanks to a DNA test, it was proven that Capone is in fact NOT a wolf/dog hybrid, and he will get to stay with his family.

“We got some good news last night,” Tracy Abbato, Capone’s human mom said Sunday.  “Capone is not wolf at all.  He doesn’t have an ounce of wolf in him.”

The Abbato family adopted Capone from the Adams County Animal Shelter about ten years ago.  While at the shelter, staff there labeled him as a “German shepherd-mix.”  When the family brought Capone to the vet, they agreed.  No one who came in contact with Capone made any statements that would lead anyone to think he was a wolf.

The trouble all started back in February, when Capone escaped from the family yard.  Aurora Animal Control picked him up while he was wandering, and whoever it was that actually came across him thought his “mannerisms, behavior and characteristics made him seem part wolf.”  Due to this, officials were unwilling to release Capone back to his family.

Capone was being held at the animal control shelter, and Abbato was actually facing charges for having him as a pet.  She was hit with violations of animal running at large, keeping an aggressive animal and keeping a wild/exotic animal.  They absolutely are fighting the matter out in court, but the court has placed a delay on the hearing until Wednesday.

“I want everyone to know he is not a wolf at all,” Abbato said.  “We all knew it from the start.  Poor guy. I don’t know what he was going through in there, but I’m sure he’ll be so excited to come home and see us and his furry brothers.  I just want him to come home now.  It’s time for him to come home.” 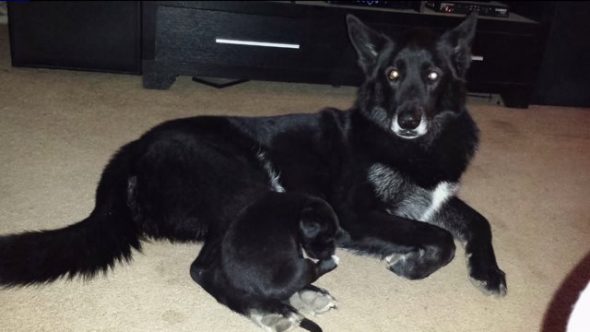